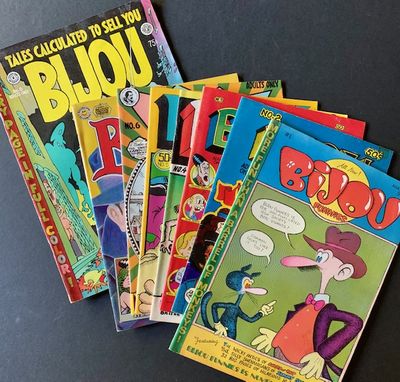 Chicago: Bijou Publishing Empire, 1973. Stapled wrappers. Near Fine. Robert Crumb, Jay Kinney, Skip Williamson, Jayzey Lynch et al. An impressive run of the first 8 issues of the "Bijou Funnies", published between 1968-1973 and including Robert Crumb, Jay Kinney, Skip Williamson and Jayzey Lynch as frequent contributors and illustrators. All 8 issues are crisp, bright and easily Near Fine in their stapled, pictorial wrappers, with light creasing along the edges to issue #8 alone. Furthermore, issue #5 is a stated 2nd printing (March, 1971), all of the other issues are 1st printings, with no mention of later printings. The earliest incarnation of "Bijou Funnies", with its wild, anarchic sensibilities suffusing every page. (Inventory #: 20673)
$400.00 add to cart or Buy Direct from Appledore Books
Share this item
Appledore Books
Offered by

The Theory of Proportion in Architecture

Cambridge University Press , 1958
(click for more details about The Theory of Proportion in Architecture)

The Captive Press in the Third Reich

Princeton University Press , 1964
(click for more details about The Captive Press in the Third Reich)
View all from this seller>