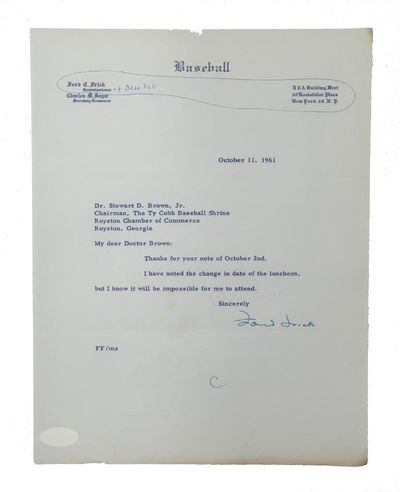 signed
by Frick, Ford C.
April 17, 1962. From Ford Frick to Dr. Stewart D. Brown, Jr. One page typed on Frick's commissioner letterhead and signed by Frick in green ink. Near fine tri-folded letter with a circle and minor annotation made by previous owner in pencil, and two tiny staple holes to top of letter. Overall, an excellent letter with a vibrant signature. Includes James Spence Authentication (JSA) certificate. In this letter, Ford Frick lets Stewart Brown, Jr. know that he is passing an attached letter on to him, presumably dealing with the "regulations or availability" of scholarships. Ford Frick served as the president of the National League from 1934 to 1951, and as the commissioner of Major League Baseball from 1951 to 1965. Frick grew the sport in many ways and was instrumental in establishing the Cooperstown National Baseball Hall of Fame, which he was inducted into in 1970. Stewart Brown, Jr. was the son of an acclaimed surgeon who collaborated with Ty Cobb to erect a hospital and the Ty Cobb Museum in Cobb's hometown of Royston, Georgia. Brown, Jr. established the Ty Cobb Memorial Baseball shrine in honor of Cobb on Sept. 29, 1961. . Signed. (Inventory #: FCF001)
$150.00 add to cart or Buy Direct from
B & B Rare Books
Share this item