[Lincoln's patent No. 6469]: "Improved method of lifting vessels over shoals" 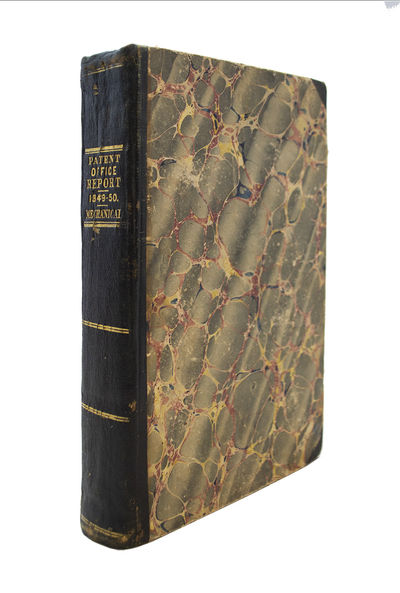 by LINCOLN, Abraham
The Only U.S. President Thus Far to be Awarded a Patent [LINCOLN, Abraham]. [Lincoln's patent No. 6469]: "Improved Method of Lifting Vessels Over Shoals" [within] Report of the Commissioner of Patents, for the year 1849. Part I. Arts and Manufactures. Washington: Office of Printers to House of Reps., 1850. First Edition. Octavo (8 3/4 x 5 3/4 inches; 220 x 145 mm). [2], [1]-626, [2, blank] pp. With six engraved plates and some engraved figures in the text (Not related to Lincoln's patent). With Lincoln's patent No. 6469 "Improved method of lifting vessels over shoals," on page 262. Original half green morocco over marbled paper boards. Spine lettered and ruled in gilt. Board edges and corners a bit rubbed and bumped. Spine with some rubbing and a few minor chips. Previous owner's old ink signature on front free endpaper and again on back board, along with a set of initials. Leaves are a bit foxed and toned, as usual for early American paper. Overall a very good copy. "Before he became the 16th president of the United States, Lincoln, who had a long fascination with how things worked, invented a flotation system for lifting riverboats stuck on sandbars. Though his invention was never manufactured, it serves to give Lincoln yet another honor: he remains the only U.S. president to have a patent in his name. According to Paul Johnston, curator of maritime history at the National Museum of American History (NMAH), Lincoln's eminence and the historical rarity of his patent make the wooden model he submitted to the Patent Office 'one of the half dozen or so most valuable things in our collection.' Lincoln's patent, No. 6469, was granted on May 22, 1849... when he was back in Springfield practicing law after one term as an Illinois congressman in Washington. His idea, to equip boats with inflatable bellows of 'india-rubber cloth, or other suitable water-proof fabric' levered alongside the hull, came as a result of river and lake expeditions he made as a young man, ferrying people and produce on the Mississippi and the Great Lakes. At least twice his boats ran aground on sandbars or hung up on other obstacles; given the Big River's ever-shifting shallows, such potentially dangerous misadventures happened often. Freeing a beached vessel usually involved the laborious unloading of cargo until the boat rode high enough to clear the snag. According to Harry R. Rubenstein, chair of the Division of Politics and Reform at NMAH, Lincoln 'was keenly interested in water transportation and canal building, and enthusiastically promoted both when he served in the Illinois legislature.' He was also an admirer of patent law, famously declaring that it 'added the fuel of interest to the fire of genius.'" (Smithsonian Magazine, Owen Edwards, October 2006). The description of the patent , written in first person is as follows: "No. 6469.- Improved method of lifting Vessels over Shoals. What I claim as my invention and desire to secure by letters patent, is the combination of expansible buoyant chambers, placed at the sides of a vessel, with the main shaft or shafts C, by means of the sliding spars or shafts D, which pass down through the buoyant chambers, and are made fast to their bottoms and the series of ropes and pulleys, or their equivalents, in such a manner that by turning the main shaft or shafts in one direction, the buoyant chambers will be forced downwards into the water, and at the same time expanded and filled with air for buoying up the vessel by the displace- ment of water, and by turning the shaft in an opposite direction, the buoyant chambers will be contracted into a small space, and secured against injury. A. LINCOLN." HBS 68731. $1,000 (Inventory #: 68731)
$1,000.00 add to cart Available from
Heritage Book Shop
Share this item