Map of the Burman Empire Including also Siam, Cochin-China, Ton-King and Malaya from Calcutta to Hong Kong 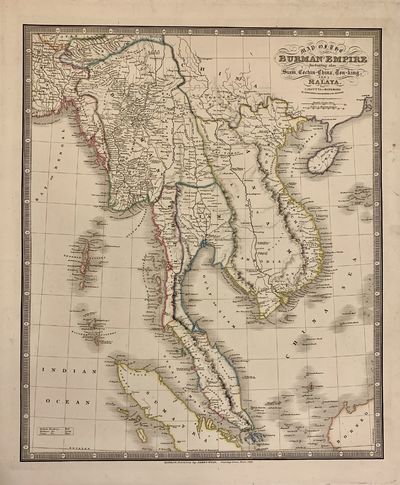 by WYLD, James
London: James Wyld, 1841. unbound. Map. Engraving with original hand colored outlines. Image measures 16.5" x 13.5". This map of the Burman Empire extends from Calcutta to Hong Kong. It includes the modern-day regions of Myanmar, Thailand, Vietnam, Cambodia, Laos, Malaysia, Singapore, and the tip of Borneo. The map was published circa 1843, shortly after the British moved to Hong Kong Island, after the Treaty Of Nanking in June 1842. British territories are colored red, Burmese green and Siamese blue, as per an index in the lower left corner. The map is in very good condition with minor chips to the edges, not affecting the image, and some scattered stray marks. James Wyld (1812-1887) was a distinguished British mapmaker known for producing maps and globes. He served as Geographer to Queen Victoria and Prince Albert. This lovely map of the East Indies is a fine example of his work. (Inventory #: 308884)
$700.00 add to cart or Buy Direct from
Argosy Book Store
Share this item