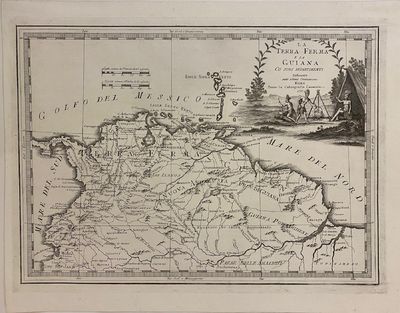 by CASSINI, Giovanni Maria
Rome: G. M. Cassini, 1798. unbound. Map. Engraving. Image measures 13 1/2 x 18 3/4" This hard to find map by Giovanni Maria Cassini dates to 1798. It details the northern coast of South America, showing Colombia, Venezuela, Guyana, Suriname, French Guiana, Ecuador, and parts of Panama, Peru, and Brazil. The map labels colonial cities and towns, and feature extensive references to indigenous groups. Rivers are prominently depicted, and topography is rendered pictorially. The most striking feature of the map is the large title cartouche in the top right. It features indigenous figures preparing food. The map appeared in the 1798 edition of Cassini's "Nuovo Atlante Geografico Universale". The map is in excellent condition. Giovanni Maria Cassini (1745 - 1824) was a geographer, engraver and globe maker based in Rome, Italy. Best known for his globes, his maps stood out for their elaborate engravings, which he did himself, unlike most publishers of the time. This is a beautiful example of his distinctive work. (Inventory #: 308948)
$600.00 add to cart or Buy Direct from
Argosy Book Store
Share this item

General Chart of the Baltic or East Sea, including the Gulfs of Botnia and Finland

London : William Faden , 1803
(click for more details about General Chart of the Baltic or East Sea, including the Gulfs of Botnia and Finland)