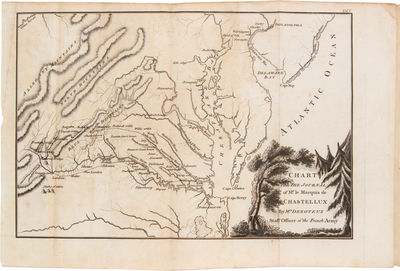 by Chastellux, François J.
London: G.G.J. and J. Robinson, 1787.. Two volumes. xv,462; xii,432pp., plus two folding maps and three folding plates. Modern three-quarter calf and marbled boards, leather label. Quite clean internally. Near fine. The first British (and first English language) edition. A classic American travel narrative, called by Howes "the first trustworthy account of life in the United States." Chastellux was second in command of the French forces in America during the American Revolution. A member of the French Academy and an enlightened and perceptive man, his work describes his travels in Connecticut, New York, New Jersey, and Virginia, and his visits with Washington and Jefferson, with much material relating to the Revolution. The maps trace the author's route, one showing Virginia and the other illustrating America from New Jersey to New England. A second edition with no edition statement was published later the same year, with only a slightly reset titlepage; a true second edition also appeared in 1787. An important work in Revolutionary and early U.S. history. HOWES C324, "aa." CLARK I:212. SABIN 12227. ESTC N62308 REESE, REVOLUTIONARY HUNDRED 82. (Inventory #: WRCAM57644)
$2,250.00 add to cart or Buy Direct from
William Reese Co. - Americana
Share this item