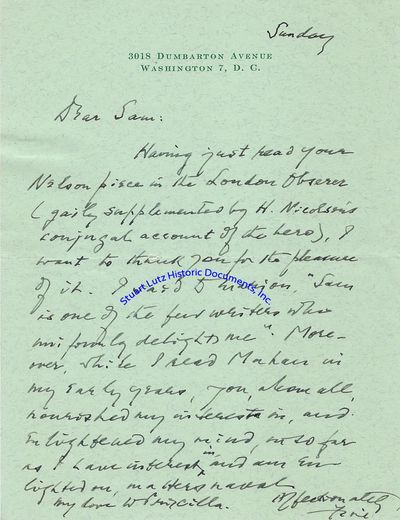 signed
by FELIX FRANKFURTER
FELIX FRANKFURTER (1882-1965). Frankfurter was a Supreme Court Justice appointed by Franklin Roosevelt. ALS. 1pg. Sunday. Washington, DC. An autograph letter signed “Felix” to the prominent naval historian Samuel Eliot Morison, referring to his article on Horatio Nelson: “Having just read your Nelson piece in the London Observer (gaily supplemented by H. Nicolson's conjugal account of the hero), I want to thank you for the pleasure of it. I said to Marion ‘Sam is one of the few writers who uniformly delights me.’ Moreover, while I read Mahan in my early years, you, above all, nourished my interest in, and enlightened my mind, in so far as I have interest in and enlightened on matters naval…”. “Mahan” is a reference to Admiral Alfred Thayer Mahan, a naval officer and naval historian. The letter is on green stationery with a faint central mailing fold and is in fine condition. (Inventory #: 5695)
$750.00 add to cart Available from
Stuart Lutz, Historic Documents, Inc.
Share this item