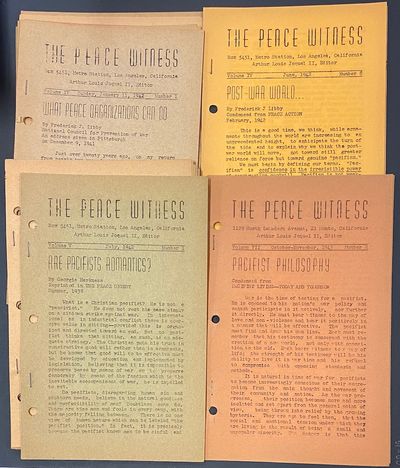 by Joquel, Arthur Louis; editor
Los Angeles; El Monte, CA: Society of Juridica, 1943. Newsletter. Fourteen issues of the staplebound mimeographed pacifist newsletter, 5.5x8.5 inches; all have holes punched at left for storage in a binder (not affecting printed portion). Issues present are vol. 4 nos. 1-8; vol. 5 nos. 1-4; and vol. 7 nos. 1 and 2. Publisher is cited on one issue as the Society of Juridica, but generally unstated. Joquel was a prominent figure in the Los Angeles Science Fantasy Society; he produced this newsletter at the same time he was working on fanzines and various projects in the occult. The contents are generally culled or condensed from various conscientious objector publications. Robert Heinlein famously hated Joquel for his pacifist stance; in a letter to Forrest Ackerman after Ackerman's brother had died in battle, Heinlein wrote "As for persons who are guilty not merely by sins of omission but who actively threw their weight against us, like that traitorous little bastard Joquel, I have no words to describe them. It is a bitter thing that he should be alive while your brother is dead. It would be well for him to stay out of my sight when this is over. (Inventory #: 288136)
$400.00 add to cart or Buy Direct from Bolerium Books
Share this item