Letters exhibiting the most prominent doctrines of the Church of Jesus Christ of Latter-day Saints in reply to the Rev. William Crowell ... Fourth edition 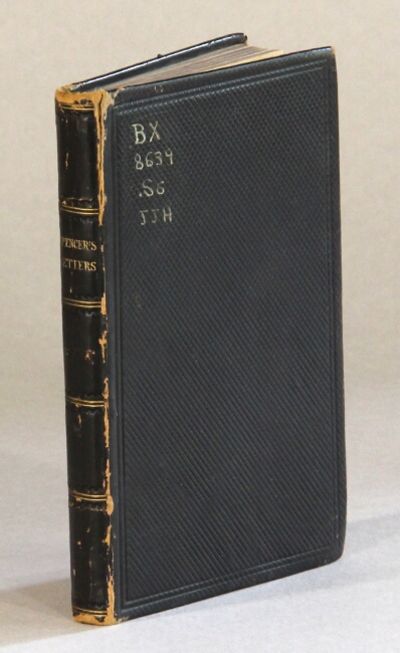 by Spencer, Orson
Liverpool & London: S. W. Richards, 1852. Small 8vo, pp. [iii]-viii, 244; 19th century black diced russia, lettered in gilt on spine; upper joint partially cracked and tender; bookplate of James J. Hill, accession numbers of J. J. Hill Library on upper cover and corresponding perforated stamp in the bottom margin of the title page touching imprint, title page neatly reinserted; a good copy. This copy inscribed on the flyleaf: "Mons. Jules Remy, presented by Governor Brigham Young, President of the Mormon Church. Great Salt Lake City, September 30th, 1855." Jules Rémy (1825-1893) was a French naturalist and traveler, and the author, with Julius Brentley, of A journey to Great-Salt-Lake City ... with a sketch of the history, religion, and customs of the Mormons, and an introduction of the religious movement in the United States (London, 1860). See Wagner-Camp (Becker), 364:2: "Remy and ... Brenchley traveled from San Francisco to Salt Lake City in the summer of 1855. After a month's stay they left for Los Angeles, which they reached on November 29, and then returned to San Francisco ... The Frenchmen were fascinated by the Mormons, and much of this book is devoted to the new American religion." Spencer, a well-educated Baptist minister who converted to Mormonism in 1841, corresponded with former colleague Reverend William Crowell and those letters form the basis of the above work. Spencer went on to head the University of Nauvoo, served as president of the British Mission, and was the first chancellor of the University of Deseret. Flake 8327; Crawley 736; Sabin 89370. (Inventory #: 60786)
$4,025.00 add to cart or Buy Direct from
rulon-miller books
Share this item

A raft pilot's log: a history of the great rafting industry on the Upper Mississippi 1840-1915

by Blair, Walter A.

Cleveland : Arthur H. Clark Co , 1930
(click for more details about A raft pilot's log: a history of the great rafting industry on the Upper Mississippi 1840-1915)

The Virginians. A tale of the last century

London : Bradbury & Evans , 1858
(click for more details about The Virginians. A tale of the last century)
View all from this seller>