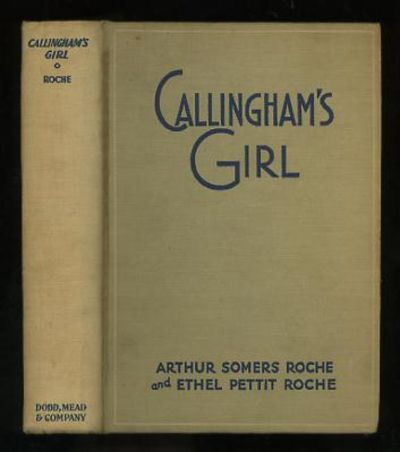 by Roche, Arthur Somers, and Ethel Pettit Roche
New York: Dodd, Mead and Company. Good. 1937. First Edition. Hardcover. (no dust jacket) [moderately worn copy, half of ffep torn away, light dampstain on rear cover, spine turned, front jacket text glued to front pastedown]. Scarce crime novel in which a detective and an orchestra leader team up to solve the murder of a notorious gamber/gangster. "A vivid picture of New York after dark. Gangsters, chorus girls, and society looking for a thrill, move through these pages, adding color and character to a story that races along on a high note of exciting suspense." Touted on the jacket blurb as the author's "latest novel," omitting to mention that he had actually been dead for a couple of years (since February 1935). This didn't seem to put much of a crimp in his output, however, this being the fifth of six novels to appear posthumously -- and the only one to bear his wife's name as co-author, which would seem to imply that the others had already been finished at the time of his demise. . (Inventory #: 14666)
$50.00 add to cart Available from ReadInk
Share this item
ReadInk
Offered by

Pittsburgh Phil; a novel of a legend

by Mastroly, Frank, and Mel Heimer

New York : Duell, Sloan and Pearce , (c.1960)
(click for more details about Pittsburgh Phil; a novel of a legend)
View all from this seller>