JOURNAL OF THE VOTES AND PROCEEDINGS OF THE GENERAL ASSEMBLY OF THE COLONY OF NEW-YORK. BEGAN THE 9TH DAY OF APRIL, 1691; AND ENDED THE 27TH OF SEPTEMBER, 1743. VOL. I. PUBLISHED BY ORDER OF THE GENERAL ASSEMBLY. [and] JOURNAL OF THE VOTES AND PROCEEDINGS...BEGAN THE 8TH DAY OF NOVEMBER, 1743; AND ENDED THE 23D OF DECEMBER, 1765. VOL. II 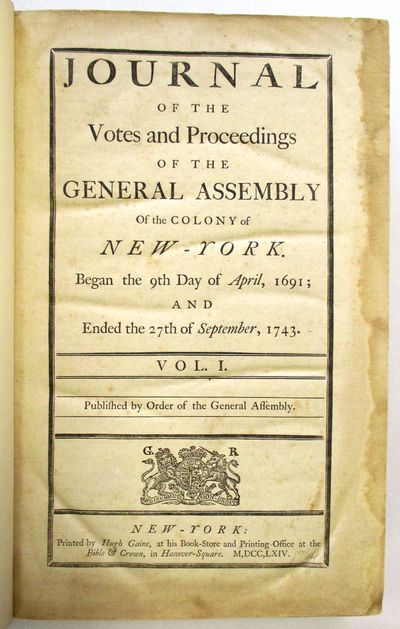 "First edition of the most important legal collection of its time, and a cornerstone of New York and American colonial history" [Jenkins]. "Edited by Abraham Lott" [Sabin]. Marke says, "The constitutional history of New York can be followed in" this offering, and Larned calls it "important." Included in Volume I is the last leaf, which Evans says "is often lacking," reversing the attainder of Jacob Leisler and others, "who were executed for not delivering the Fort at New York to Richard Ingoldsby, 1690" [Sabin].
Although Journals of New York General Assembly Sessions had been published annually, this is their first compilation.
FIRST EDITION. Evans 9756, 10418. Marke 80. Larned, page 10 #161. Sabin 53719. (Inventory #: 24264)
$2,500.00 add to cart or Buy Direct from
David M. Lesser, Fine Antiquarian
Share this item
David M. Lesser, Fine Antiquarian Books LLC
Offered by