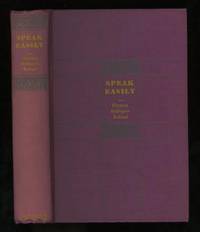 by Kelland, Clarence Budington
New York/London: Harper & Brothers. Very Good+. 1932. First Edition. Hardcover. (no dust jacket) [good solid book, very light bumping to extremities, light dust-soiling to top edge, short pucker-line in rear-cover cloth, contemporary (non-authorial) gift inscription on ffep]. Very uncommon novel (originally a magazine serial under the title "Footlights") by this popular and prolific author, a kind of screwball-farce about a college instructor who inherits a fortune and is subsequently fired from his teaching position (by the college president, who wants to force him to use his money to get some experience of real life). In quest of said experience, he heads for (where else?) New York; he falls in with a crowd of show people on the train, which leads him to take up residence at a theatrical boarding house in the city. Before you can say "duck out of water," he accompanies his newfound friends to a "speak easily," gets drunk (without realizing it) and agrees to bankroll a Broadway revue. Comic complications ensue as our naive hero inadvertently foils a jewel robbery, fends off the seductive attentions of an ambitious singer, overlooks the fact that he's falling in love with the wisecracking landlady's daughter (and vice versa), and runs dangerously afoul of a notorious gangster, all the while trying to get the show on the boards. This maelstrom of madcappery made it to the silver screen as a fitfully amusing MGM talkie starring Buster Keaton, Jimmy Durante and Thelma Todd. . (Inventory #: 14762)
$100.00 add to cart Available from ReadInk
Share this item
ReadInk
Offered by

Philadelphia/New York : J. B. Lippincott Company , (c.1960)
(click for more details about To Kill a Mockingbird)