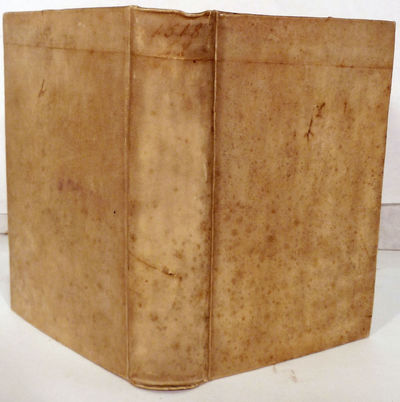 by Plinius Secundas, Gaius
Venice: Aldi, et Andreae Asulani (Aldus), 1518. Second Aldine Edition. Hardcover. Later full vellum. Very good. 525 pages. 8vo, 14 1/2 x 9 cm. [*8-****2,a8-z8,aa8-kk8]. DIBDIN notes, "Containing ten books, with many Epistles never before published: it has also the "Panegyric." These are the only editions of Pliny's Epistles that ever issued from the Aldine press......The edition of 1508 [the first edition] is curious from being the first work in which the subscription announces the partnership of Aldus with his father-in-law Asulanus. It is compiled from some MSS. which Mocenigo brought from France to Italy, and which Aldus says are not only very correct, but which one would suppose to be as ancient as the time of Pliny himself".........The edition of of 1518 is merely a reimpression of the first of 1508, with a few typographical errors corrected." [see: AN INTRODUCTION TO THE KNOWLEDGE OF RARE AND VALUABLE EDITIONS OF THE GREEK AND ROMAN CLASSICS, Vol.II, p.158]. ADAMS P1538. RENOUARD 82. Marginal stains at lower fore-edge not affecting text, a few minor paper flaws and repairs with slight loss at leaf *5, some old underscoring and penned marginalia. 19th century and earlier owner signatures. Firm copy in bright binding, little or no text age-toning. (Inventory #: 15506)
$1,450.00 add to cart or Buy Direct from
Roy Young Bookseller
Share this item
Roy Young Bookseller, Inc.
Offered by

The Working-Man's Cottage Architecture, Containing Plans, Elevations, And Details, For The Erection Of Cheap, Comfortable, And Neat Cottages

A Home for All or The Gravel Wall and Octagon Mode of Building New, Cheap, Convenient, Superior and Adapted to Rich and Poor

new York : Fowler and Wells , 1854
(click for more details about A Home for All or The Gravel Wall and Octagon Mode of Building New, Cheap, Convenient, Superior and Adapted to Rich and Poor)
View all from this seller>