A Mathematical And Philosophical Dictionary: Containing An Explanation Of The Terms, And An Account Of The Several Subjects, Comprized Under The Heads Mathematics, Astronomy, And Philosophy Both Natural And Experimental:; With An Historical Account Of The Rise, Progress And Present State Of These Sciences: Also Memoirs Of The Lives And Writings Of The Most Eminent Authors, Both Ancient And Modern, etc. 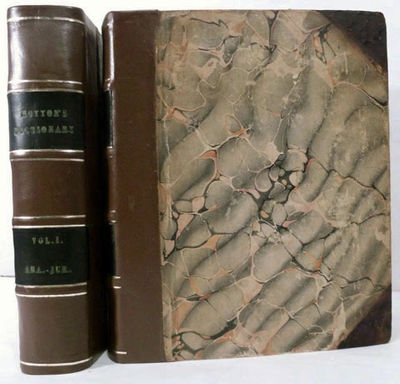 by Hutton, Charles
London: J. Johnson, 1796. First edition. Hardcover. Orig. marbled boards rebacked, brown calf with black leather spine labels lettered in gilt. 2 vols. Very good/Near fine. 650, 756 pages. 27 x 23 cm. Thirty-seven copper engraved plates, and a host of diagrams and tables in the text. Volume I, 1796 probably a later issue -- copies noting 1795 and 1796 on title page are found. In 1773 he was appointed professor of mathematics at the Royal Military Academy, Woolich, and in the following year he was elected fellow of the royal Society of London and reported on Nevil Makelyne's determination of the mean density and mass of the earth from measurements taken in 1774-1776 at Schiehallion in Pertshire. "A most useful work for biographical information and for showing the state of science about 1800 is Charles Huttons's "Mathematical and Philosophical Dictionary." [see: KNIGHT p.76]. This work is considered a valuable contribution to scientific biography. GENTLEMAN'S MAGAZINE, March 1823 noted, "It has supplied all subsequent works of that description, and even the most voluminous Cyclopedias, with valuable materials, both in the sciences and in scientific biography." Two leaves of tables repaired with archival tape, endpapers foxed, text mildly toned, overall, a crisp, clean set. (Inventory #: 18219)
$750.00 add to cart or Buy Direct from
Roy Young Bookseller
Share this item
Roy Young Bookseller, Inc.
Offered by

An Historical Account Of The Establishment, Progress and State Of The Bank of Scotland;; And of the several Attempts that have been made against it, and the several Interruptions and Inconveniences which the Company has encountered

Edinburgh : Np , 1728
(click for more details about An Historical Account Of The Establishment, Progress and State Of The Bank of Scotland;; And of the several Attempts that have been made against it, and the several Interruptions and Inconveniences which the Company has encountered)

New York : D. Appleton & Co , 1872
(click for more details about A Souvenir Of The Anchor Line Agents Excursion On The Steam Steamer California August 14 1872)
View all from this seller>