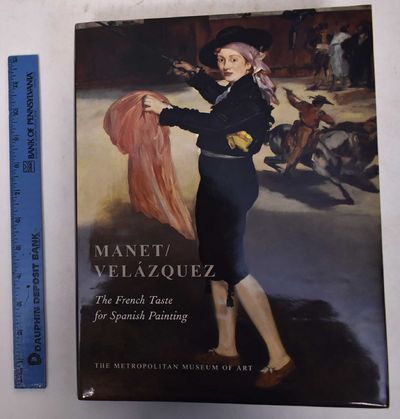 by Tinterow, Gary and Genevieve Lacambre, et al.
New York / New Haven: The Metropolitan Museum of Art / Yale University Press, 2002. Hardcover. VG. Red cloth with color-illustrated glossy dustjacket. 592 pp., profusely illustrated with 349 bw and 380 color plates. Catalogue features a whopping 226 artworks, all of them extensively annotated. Published in conjunction with an exhibition held at the Musee d'Orsay, Paris, Sept. 16, 2002-Jan. 12, 2003 and at the Metropolitan Museum of Art, New York, Mar. 4-June 8, 2003. Contents as follows: Raphael replaced: the triumph of Spanish painting in France / Gary Tinterow -- The discovery of the Spanish school in France / Geneviève Lacambre -- Seville's artistic heritage during the French occupation / Ignacio Cano Rivero -- The origins of the Museo del Prado / María de los Santos García Felguera Javier Portús Pérez -- Goya and France / Juliet Wilson-Bareau -- Goya and the French romantics / Ilse Hempel Lipschutz -- The Galerie Espagnole of Louis-Philippe / Jeannine Baticle -- From Ziegler to Courbet: painting, art criticism, and the Spanish Trope under Louis-Philippe / Stéphane Guégan -- Manet and Spain / Juliet Wilson-Bareau -- American artists' taste for Spanish printing / H. Barbara Weinberg -- A legacy of Spanish art for America: Archer M. Huntington and the Hispanic Society of America / Mitchell A. Codding -- Nineteenth-century French copies after Spanish Old Masters / Dominique Lobstein -- The Dresden remains of the Galerie Espagnole: a fresh look (at the) back / Matthias Weniger. "This illustrated book accompanies a groundbreaking exhibition - the first of such scale and depth to be organized around this subject - that traces the roots of Modernism in mid-nineteenth-century French Realism. In 1804, at the dawn of the French Empire, there were no more than a handful of Spanish paintings in public collections in France. During the course of the nineteenth century, however, French collectors and museums assembled substantial holdings of works by such Spanish masters as El Greco, Zurbaran, Velazquez, Murillo, and Goya, while French writers and artists - among them Hugo and Baudelaire, Gericault, Delacroix, Millet, Courbet, Degas, and especially Manet - came to understand, appreciate, and even emulate Spanish painting of the Golden Age. Here approximately two hundred works by French and Spanish artists chart the development of this cultural influence and map a fascinating shift in the paradigm of painting, from Idealism to Realism, from Italy to Spain, from Renaissance to Baroque. Above all, these images demonstrate how direct contact with Spanish painting fired the imagination of nineteenth-century French artists and brought about the triumph of Realism in the 1860s, and with it a foundation for modern art. (Inventory #: 105398)
$29.99 add to cart or Buy Direct from Mullen Books
Share this item

Racial Segregation and the Origins of Apartheid in South Africa, 1919-36

Houndmills, Basingstoke, Hampshire : Macmillan in association with St. Antony's College, Oxford , 1989
(click for more details about Racial Segregation and the Origins of Apartheid in South Africa, 1919-36)
View all from this seller>