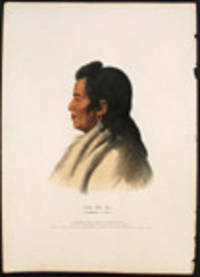 by MCKENNEY, Thomas L. (1785-1859) and James HALL (1793-1868)
Philadelphia: E. C. Biddle, 1837. Lithograph, printed and hand-colored by J. T. Bowen after a portrait by Saint-Memin in the American Philosophical Society. In excellent condition apart from faint off-setting in plate. A fine image from McKenney and Hall's 'Indian Tribes of North America': `One of the most important [works] ever published on the American Indians' (Field),` a landmark in American culture' (Horan) and an invaluable contemporary record of a vanished way of life.

Shahaka, or Coyote (c. 1765 - c. 1810) was known to Lewis and Clark as Big White. He was a large, affable man, and unusually talkative, a trait despised by Native Americans generally. Chief of the "Lower Village" of Mandan on the Missouri in present day North Dakota, he won the friendship of Lewis, Clark and the rest of the expedition, and he was invited back to meet President Jefferson who entertained him at Monticello. During his visit to Philadelphia, Charles Balthasar Julien Febret de Saint-Mémin painted the chief's portrait, which was given to the American Philosophical Society, and it is from this that McKenney's portrait was made. Accused of being seduced by the white man's world and of fabricating tales, Shahaka's people were extremely uninterested in hearing his travel stories. He was killed in a battle with the Sioux a few years later. Mckenney and Hall's 'Indian Tribes of North America' has long been renowned for its faithful portraits of Native Americans. The portraits are largely based on paintings by the artist Charles Bird King, who was employed by the War Department to paint the Indian delegates visiting Washington D.C., forming the basis of the War Department's Indian Gallery. Most of King's original paintings were subsequently destroyed in a fire at the Smithsonian, and their appearance in McKenney and Hall's magnificent work is thus our only record of the likenesses of many of the most prominent Indian leaders of the nineteenth century. Numbered among King's sitters were Sequoyah, Red Jacket, Major Ridge, Cornplanter, and Osceola. After six years as Superintendent of Indian Trade, Thomas McKenney had become concerned for the survival of the Western tribes. He had observed unscrupulous individuals taking advantage of the Native Americans for profit, and his vocal warnings about their future prompted his appointment by President Monroe to the Office of Indian Affairs. As first director, McKenney was to improve the administration of Indian programs in various government offices. His first trip was during the summer of 1826 to the Lake Superior area for a treaty with the Chippewa, opening mineral rights on their land. In 1827, he journeyed west again for a treaty with the Chippewa, Menominee , and Winebago in the present state of Michigan. His journeys provided an unparalleled opportunity to become acquainted with Native American tribes. When President Jackson dismissed him from his government post in 1830, McKenney was able to turn more of his attention to his publishing project. Within a few years, he was joined by James Hall, a lawyer who had written extensively about the west. McKenney and Hall saw their work as a way of preserving an accurate visual record of a rapidly disappearing culture. (Gilreath).