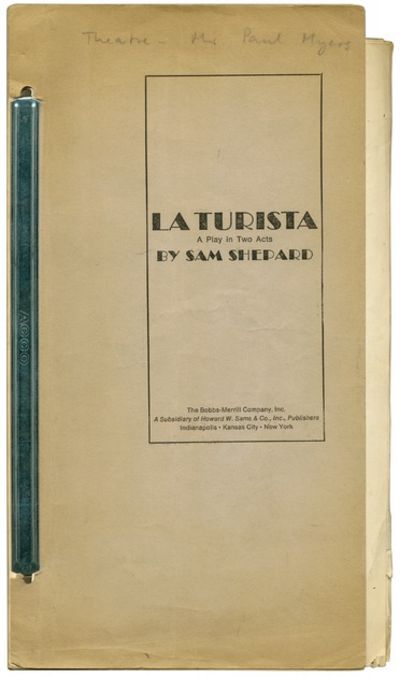 by SHEPARD, Sam
Indianapolis: Bobbs-Merrill. (1968). The galley sheets of this early play by Shepard, his first two-act play. Laid in are the galleys of Elizabeth Hardwick's introduction, dated 1967; Hardwick had reviewed the play for the New York Review of Books. At the time Shepard wrote La Turista, he was a member of the counterculture rock band The Holy Modal Rounders, which had a cameo appearance in the film Easy Rider. Shepard was nominated for an Academy Award for his role as test pilot Chuck Yeager in The Right Stuff; he won a Pulitzer Prize for Drama in 1979 for Buried Child, and he won eleven Obie awards and was nominated for two Tonys, for Buried Child and True West. He received the Gold Medal for Drama from the American Academy of Arts and Letters in 1992. Claspbound, printed on rectos only, front cover tanned and separating; rear cover has date and price and "DUPL NYPL." Front cover has the name of Paul Myers, curator of the Theatre Collection at the New York Public Library. Very good. A fragile and rare early state of this play by one of the most important playwrights of the latter half of the 20th century. The only copy of the proof we have seen. Unless otherwise noted, our first editions are first printings. First Edition. No Binding. Very Good. (Inventory #: 027093)
$2,500.00 add to cart Available from
Ken Lopez - Bookseller
Share this item