Autographed Letter Signed to the Earl of Suffolk 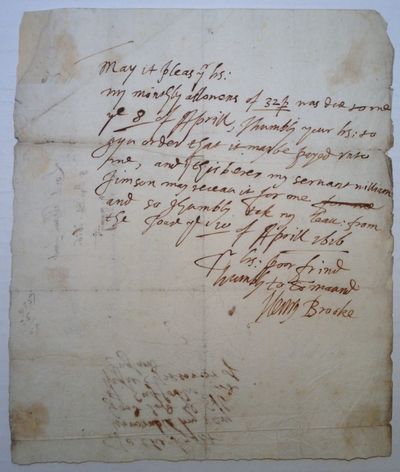 by BROOKE, Henry - 11th Baron Cobham (1564 - 1619)
London, 1616. unbound. 1 page with 8 lines of writing, 9 x 7.5 inches, Tower of London, April 8, 1616. Signed in full by the conspirator in the plot to place Arabella Stuart on the throne instead of James I. He was arrested with Sir Walter Scott (who he accused of complicity) and was condemned to death but later pardoned. This letter is written to the Earl of Suffolk, Lord High Treasurer, asking payment of a pension due him, which was never revoked, in full: "May it pleas yr hs: My monthly allowens of 32p was due to me ye 8 of Aprill. I humbly (beg) your hs: to gyve order that it may be payed unto me...my servant William Jimson may receav it for me and so I humbly tak my leav: from the Tower ye 8th of Aprill 1616. Yr hs: poor friend humbly to be named Henry Brooke" Docketed Lord Cobham 8 Aprilis 1616. Stained on the corners with slight tears along the right edge. Good condition. (Inventory #: 6216)
$2,000.00 add to cart or Buy Direct from
Argosy Book Store
Share this item