Lengthy Autographed Letter Signed about his trip to Italy 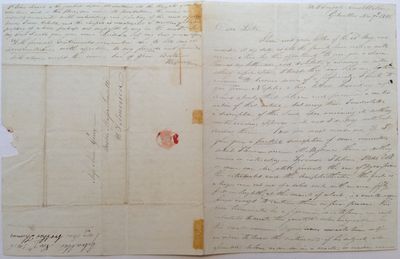 by GERRY FAMILY -- R. Gerry
Gibralter, 1816. unbound. 4 pages (front and back), 9 x 7 inches, Gibralter, November 7, 1816. Written by the brother of Vice-President Elbridge Gerry to his sister, Ann Gerry, describing some of the highlights of his trip to Italy, especially Syracuse and Malta, in part: "...a larger cave cut out of a solid rock, with an area fifty feet in height, at the summit of which, is a small room large enough to contain three or four persons. This area terminates in a pyramid, so as to form an arch calculated to create the greatest echo imaginable. To this small room Dionysious concealed himself in order to hear the sentiments of his subjects..." Addressed on the back of last page. Partial tearing along one of the folds; chip on the outer margin where the wax seal was, obscuring some text; tape stains on the right edge of the last page. Good condition. (Inventory #: 4999)
$400.00 add to cart or Buy Direct from
Argosy Book Store
Share this item