A LETTER TO THE SECRETARY OF THE TREASURY, ON THE COMMERCE AND CURRENCY OF THE UNITED STATES. BY ARISTIDES 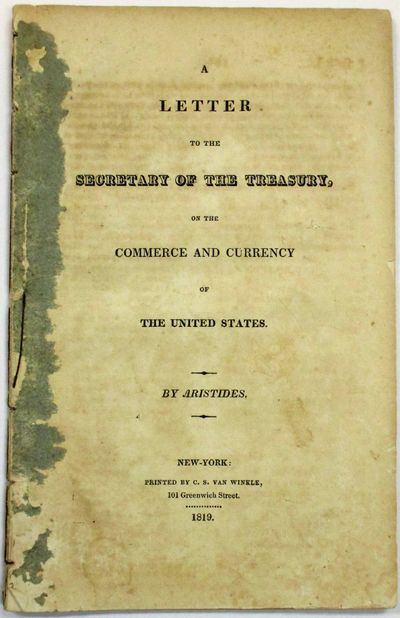 This pamphlet advocates, in response to the Panic of 1819, "two restrictions on banks: first, they may discount no 'accommodation paper,' i.e. simple loans that were not self-liquidating in the course of active trade; and second, that they grant no renewals of loans." The absence of such restrictions, the author argues, encouraged excessive speculations and brought about the depression. [See Rothbard, 'The Panic of 1819', page 132 (1962)]. As evidence, Aristides cites the "wild enthusiasm" which characterized resumption of commerce after the 1815 Treaty of Ghent, and the resulting extensions of credit "to the utmost limit."
Authorship has been variously attributed to Webster and Van Ness. Skeel doubts Webster's hand. "Among other reasons she states that the Letter does not seem to be written in his style and that she finds no allusion to it in his letters. The pamphlet has also been ascribed to William P. Van Ness, another who used the pseudonym 'Aristides.'"
[Sabin].
AI 49978 [4]. Sabin 102364. See Skeel page 563, note 12. (Inventory #: 24603)
$450.00 add to cart or Buy Direct from
David M. Lesser, Fine Antiquarian
Share this item
David M. Lesser, Fine Antiquarian Books LLC
Offered by