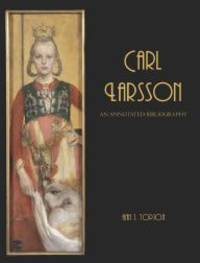 by Topjon, Ann J.
New Castle: Oak Knoll Press, 2008. cloth, dust jacket. Larsson, Carl. 4to. cloth, dust jacket. 454 pages. First edition. Carl Larsson (1853-1919) is perhaps the most renowned Swedish artist, in his own country and beyond. He rose from an impoverished childhood and youth to find the perfect expression for his artistic talent in watercolors, winning medals in France at the Salons. His works in this medium became widely known through eight "albums" of his home and family, which he not only illustrated but also narrated and which were successfully marketed in Germany as well as in Sweden. These books were published in several editions during his lifetime and reissued, some in revised format, starting in the latter twentieth century. Along with being an exquisite watercolorist, Larsson also was a talented illustrator, a superb portrait painter, a fine graphic artist and an imaginative muralist, who was influenced by pre-Raphaelitism, Art Nouveau, arts of the Gustavian period and Japonisme. Possibly the most providential factor in his life was his marriage to Karin Bergöö. Together, in the small cottage in Sundborn given to them by her father, they created a home with unique and personal interiors, which influenced generations of interior designers through the twentieth and into the twenty-first century. This is the first comprehensive bibliography on Larsson and, with approximately 5900 entries, encompasses all known works by him, including albums, book illustrations and any articles he wrote and/or illustrated in all languages and countries. The bibliography also documents and annotates the plethora of materials about him in all languages, including monographs, incidental books, encyclopedia articles and exhibition catalogs, as well as the numerous journal and newspaper articles written about him during his lifetime and up to the present. The book includes a section of 16 color plates highlighting Larsson's work. Ann J. Topjon is Associate Professor/Librarian Emeritus from Whittier College, California, and has spent over 20 years compiling this record of Carl Larsson, which will be an invaluable tool for all those researching his life and works. She has contributed bibliographies for the catalogs of two important Larsson exhibitions: the retrospective "Carl Larsson" in Stockholm, Sweden, in 1992, and "Carl and Karin Larsson: Creators of the Swedish Style" in London, England, in 1997. (Inventory #: 94200)
$135.00 add to cart or Buy Direct from Oak Knoll Books
Share this item