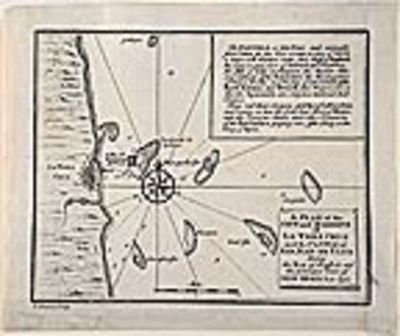 "The War of Jenkins's Ear was a conflict between Great Britain and Spain that lasted from 1739 to 1748. After 1742 it merged into the larger War of the Austrian Succession. The present map of Veracruz and its environs, printed just after the start of the war, was produced as it was apparent that the fortress' role as a centre for trade made it a prime target for the British. Under the 1729 Treaty of Seville, the British had agreed not to trade with the Spanish colonies. To verify the treaty, the Spanish were permitted to board British vessels in Spanish waters. After one such incident in 1731, Robert Jenkins, captain of the ship Rebecca, claimed that the Spanish coast guard had severed his ear. The British government, which was determined to continue its drive toward commercial and military domination of the Atlantic basin, used this incident as an excuse to wage war against Spain in the Caribbean. In 1738 Jenkins exhibited his pickled ear to the House of Commons, whipping up war fever against Spain. To much cheering, the British Prime Minister, Robert Walpole, reluctantly declared war on October 23, 1739." (Wikipedia). (Inventory #: 20668)
$400.00 add to cart or Buy Direct from
Donald A. Heald Rare Books
Share this item
Donald A. Heald Rare Books
Offered by