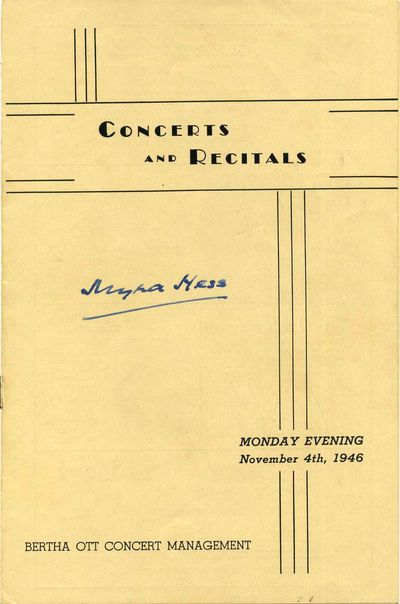 by Hess, Myra (1890-1965)
Chicago, IL: Bertha Ott Concert Management, 1946. Book. Very good condition. Paperback. Signed by Author(s). First Edition. Octavo (8vo). 12 pages concert and recital program, dated November 4th, 1946. Signed by the pianist "Myra Hess" on the front cover. Hess performed a piano recital at Orchestra Hall of Bach, Beethoven and Brahms. Handwritten details of encore selections are noted, including Chopin, Brahms and Scarlotti. Front cover is detached. Enclosed is a typed letter, signed by the assistant to Hess. It reads "Dear...I enclose herewith the programs, which Dame Myra Hess has signed for you and also two photographs, which she thought you would like. She was very much touched by your consideration, in not joining the crowd of autograph hunters, after her Chicago recital. It is not everyone who realises what it entails, to give a program of that kind. She sends you her best wishes, in which I join. Yours Sincerely [signed] Anita Gunn." The photographs mentioned are not included, and were not included when the program was placed in our inventory.. (Inventory #: 009486)
$200.00 add to cart or Buy Direct from
Kurt Gippert Bookseller
Share this item
Kurt Gippert Bookseller
Offered by