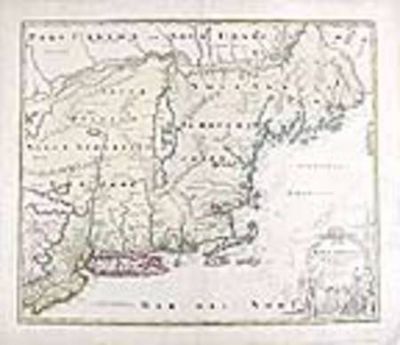 by HOMANN, Johann Baptist (1663-1724)
Nuremberg: [Homann Heirs], 1730. Copper-engraved map, with full original colour, on an untrimmed sheet. A fine example of one of the eighteenth-century's most decorative maps of New England and New York.

This very fine map, in magnificent full original colour, focuses on New England, but embraces the entire territory from Philadelphia in the south up to the St. Lawrence Valley in the north. It depicts the region as it was considered before the British government commissioned advanced surveys of the subject. The geographic portrayal of the coast of New England is quite detailed, and features extensive hydrological information off of the coast. Curiously, however, Boston Harbor is shown to be dramatically larger than it actually was, and Cape Cod is shown to be an island. In the interior, Lake Champlain is depicted to be dramatically east of its true location, and New York's Lake Seneca is creatively shown to be a large body of water that drains into the Hudson Valley. To the north, the portrayal of New France is equally fanciful, as "Mont Royal" Island, the site of Montreal, takes on a massive, attenuated form immediately adjacent to Lake Ontario. True to Homann's artistic signature, the map features a finely-engraved cartouche in the lower right corner that depicts American scenes of commerce and nature. One of the most celebrated cartographers of his day, Johann Baptist Homann established the most successful German publishing house of the eighteenth century. His prolific business, which was inherited by his family after his death, dominated Germany's map market for over a century, and produced some of the finest maps and atlases of the age. He established himself in Nuremberg, and by 1715 was appointed Geographer to the Emperor. After Homann's death, the business was taken over by his son, Johann Christoph. From 1730, the firm was entrusted to a committee of family members, the Homann Heirs, who published maps and atlases for the next two generations, maintaining the high standards set by Johann Baptist.