A Map of the most Inhabited part of New England containing the Provinces of Massachusets Bay and New Hampshire, with the Colonies of Conecticut and Rhode Island, Divided into Counties and Townships: The whole composed from Actual Surveys and its Situation adjusted by Astronomical Observations 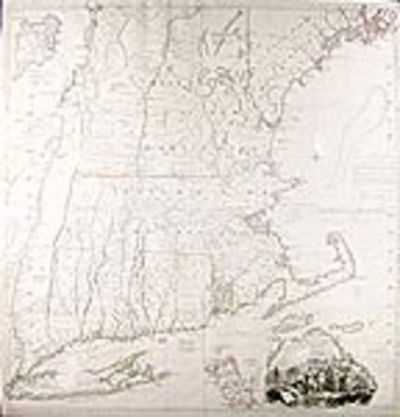 This is the grandest, most accurate and detailed map of New England produced during the British colonial period. It depicts the entire region from Long Island Sound up north to the line of 44'30 of latitude. While it shows that the coastal areas and the lower Connecticutt Valley were well settled, areas of the interior, especially in New Hampshire and the future Vermont were just developing, with the early boundaries of townships having recently been established by surveyors. Importantly, this map contains two detailed cartographic insets, one of the city of Boston (upper-left), and another of Boston Harbor on the lower-right sheet. The map is also adorned with a very handsome pictorial title cartouche, depicting the arrival of the Pilgrims at Plymouth Rock in 1620. The present map is the edition produced by Georges-Louis Le Rouge, then the royal Geographer to Louis XVI, and was significantly updated from the original issue of 1755. Copies of this issue would most certainly have been consulted by French commanders such as the Comtes D'Estaing and Rochambeau who both led forces in New England following France's entry into the Revolutionary War in support of the American cause in 1778. This map's maker, John Green, was an intriguing and larger-than-life figure, who has been called "the genius behind Jefferys". In addition to his extensive cartographic abilities, Green's personal history also stands out from amongst the biographies of other 18th-century British map makers. Green was born Braddock Mead in Ireland around 1688, married in Dublin in 1715 and moved to London in 1717. He was imprisoned in 1728 for trying to defraud an Irish heiress, and assumed his alias after his release from prison. He worked with Ephriam Chambers on his Universal Dictionary before joining the employ of Cave, Astley, and Jefferys. William Cumming remarked that Mead/Green 'had a number of marked characteristics as a cartographer ... One was his ability to collect, to analyze the value of, and to use a wide variety of sources; these he acknowledged scrupulously on the maps he designed and even more fully in accompanying remarks. Another outstanding characteristic was his intelligent compilation and careful evaluation of reports on latitudes and longitudes used in the construction of his maps, which he also entered in tables on the face of the maps ... Mead's contributions to cartography stand out ... At a time when the quality and the ethics of map production were at a low ebb in England, he vigorously urged and practiced the highest standards; in the making of maps and navigational charts he was in advance of his time. For this he deserves due credit.' (Cumming, p.45).

Silva: or, a Discourse of Forest-Trees, and the Propagation of Timber in his Majesty's Dominions: As it was delivered in the Royal Society on the 15th day of October, 1662, upon Occasion of certain Quaeries propounded to that illustrious Assembly, by the Honourable the Principal Officers and Commissioners of the Navy, together with an Historical Account of the Sacredness and Use of Standing Groves

York : Printed by A. Ward for J. Dodsley et al. , 1786
(click for more details about Silva: or, a Discourse of Forest-Trees, and the Propagation of Timber in his Majesty's Dominions: As it was delivered in the Royal Society on the 15th day of October, 1662, upon Occasion of certain Quaeries propounded to that illustrious Assembly, by the Honourable the Principal Officers and Commissioners of the Navy, together with an Historical Account of the Sacredness and Use of Standing Groves)
View all from this seller>