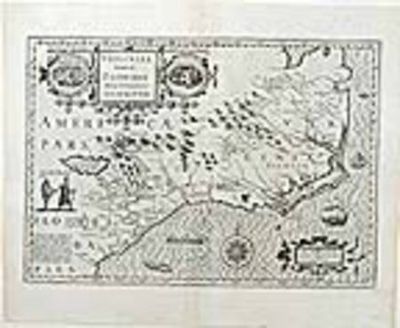 The Mercator-Hondius map of Virginia and Florida, first published in 1606 by Jodocus Hondius, was the only regional American map in his edition of the Mercator Atlas. It is a remarkably good rendition of the coastline from St. Augustine to the Chesapeake Bay and points interior. Derived from John White's map of Virginia (what became North Carolina), Le Moyne-De Bry's map of Florida (what became South Carolina, Georgia and north Florida) and early travel accounts, Hondius cobbled together a map of great interest. On the coast one finds a roughly accurate northeasterly shoreline from the Spanish fort of St. Augustine to the St. John's River (here called R. de May) where the second unsuccessful Huguenot colony struggled in 1564, upward to Port Royal, where the first unsuccessful Huguenot colony failed in 1562, upward to Cape Fear (here Cape St. Romano) to the Outer Banks and finally to the clearly as yet unexplored Chesapeake Bay. Of the interior, rumor contends with pure fiction, but the source of many rivers is the "Apalatcy" mountain range, which also promises gold and silver. The South Carolina-Georgia portion of the interior is much more heavily notated with native villages, probably impossible at this point to verify. The map is embellished with illustrations borrowed from Le Moyne and White, including native towns, a native king and queen and a canoe. The title cartouche is a handsome three part figure with the two village illustrations on either side of the title.