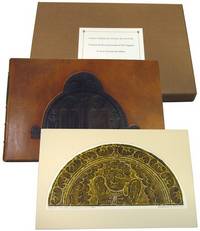 by NEAL, Avon and PARKER, Ann
NY: Sweetwater Editions. (1981). The limited edition of this handsome book of photographs by Ann Parker, and gravestone rubbings, with text by Avon Neal. One of 175 numbered copies bound in full mottled calf, blind stamped and with raised bands and green leather spine label, and signed by Neal and Parker. In addition, there are two selenium-toned silver prints by Ann Parker laid in, matted, numbered and signed by Parker and an original gravestone rubbing, also matted, numbered, and signed by both authors. The book is fine. Enclosed with the prints in a clamshell box, which is also fine. A handsome and important production, many copies of which were destroyed when the publisher was bought and the new owner discarded existing inventory. This copy from the library of the authors, with a letter of provenance available. Unless otherwise noted, our first editions are first printings. First Edition. Hardcover. Fine. (Inventory #: 027369)
$2,500.00 add to cart Available from
Ken Lopez - Bookseller
Share this item