The 1940 Oregana; published by the associated students University of Oregon at Eugene 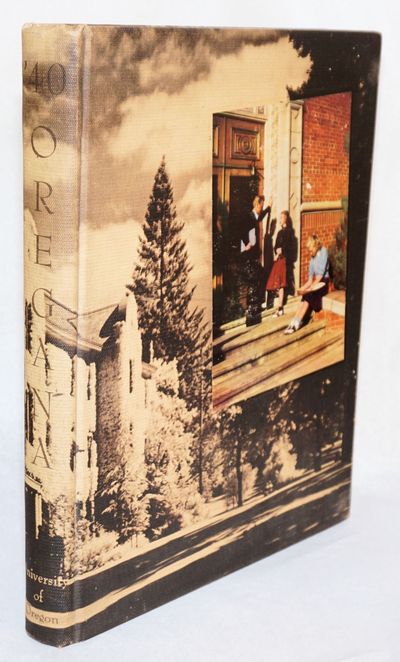 by Knight, George, editor, Dick Williams, manager, K. Chin illustrations
Eugene: Associated Students University of Oregon, 1940. Hardcover. 400p., massive 10.5x13.25 inch hardbound, illustrated with b&w photos, color plates, artworks by K. Chin and others, mild dampstain to the bottom edge of the last 50 pages into the margins, otherwise very good in original pictorial cloth with color photo affixed to the front cover. K. Chin, of Chinese ancestry, was born in Portland, Oregon in 1920, where he received his initial art training at the Portland Museum School of Art and the University of Oregon.
During World War II Chin served as a mechanical draftsman with the US Air Corps, at which time he sharpened his skill at rendering detailed images. He served for 4-1/2 years. He illustrated magazine covers for US Army, American Legion, and later, Cue Magazine and Newsweek. [John Stokes of Custom Puzzle Craft!]. (Inventory #: 130066)
$35.00 add to cart or Buy Direct from Bolerium Books
Share this item