On the dental characters of genera and species, chiefly of fishes, from the low main seam and shales of coal, Northumberland 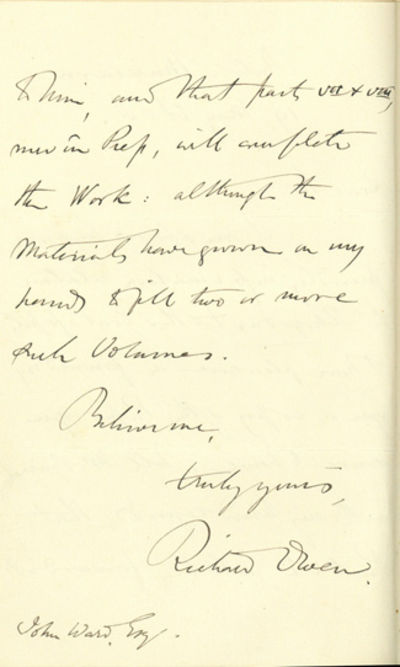 by Owen, Richard
London: Wyman & Sons, 1867. Presentation Copy with Autograph Letter Signed Owen, Richard (1804-92). On the dental characters of genera and species, chiefly of fishes, from the low main seam and shales of coal, Northumberland. Offprint from Transactions of the Odontological Society of Great Britain. 8vo. 72pp. 15 chromolithographed plates. London: Wyman & Sons, 1867. 211 x 137 mm. 19th century cloth, a little shaken, minor wear at spinal extremities, handwritten paper spine label (a little chipped). Presentation copy, with 2-page A.L.s. from Owen to the recipient John Ward, dated 19 May 1868, tipped in at the front; Ward's signature (dated May 1868) and note "Presented by Professor Owen" on the title. Sheet of notes in pencil in an unidentified hand laid in. First Separate Edition of Owen's brief monograph on fossil teeth, originally intended for inclusion in a second edition of Owen's Odontography, which, however, was never published. The work is iIllustrated with 15 colored plates showing cross-sections and microscopic views; Owen had been among the first to take advantage of recent improvements in microscopy to study the structure of fossil teeth. Owen presented this copy to John Ward, a collector of fossils who contributed specimens to the British Museum; see The History of the Collections Contained in the Natural History Departments of the British Museum (1904), p. 235. Owen's letter to Ward reads as follows: I am obliged by your friendly information relative to Rhizodus & other coal-fossils, & have pleasure in forwarding you a copy of the Paper you desire to have. Tell Mr. Garner with my kind regards, that "Part VI" will be forwarded to him, and that parts VII & VIII, now in Press, will complete the Work: although the Materials have grown on my hands to fill two or more such volumes. Believe me, truly yours, Richard Owen. [postscript] I could not, just at present, devote time to describe your Fossils-I may tell you when I am at leisure to take them in hand. "Rhizodus" refers to an extinct group of predatory lobe-finned fishes. We have not been able to identify the publication Owen mentions. B.M. (Nat. Hist.), p. 1491. Owen, Life, II, p. 369. Rukpe, Richard Owen, pp. 113-15. . (Inventory #: 40211)
$2,250.00 add to cart or Buy Direct from
Jeremy Norman & Co.
Share this item
Jeremy Norman & Co., Inc.
Offered by