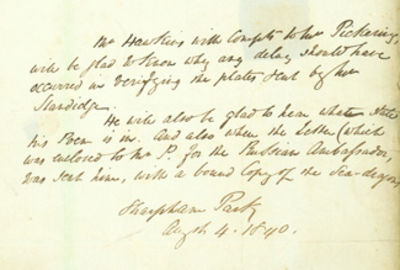 by Hawkins, Thomas
1840. To William Pickering Concerning the Book of the Great Sea Dragons Hawkins, Thomas (1810-89). Autograph letter signed to publisher William Pickering (1796-1854). Sharpham Park, Augst. 4, 1840. 1 page plus integral address leaf. 227 x 190 mm. Stamp cut out from address leaf, not affecting text, light soiling & fraying. From fossil collector and dealer Thomas Hawkins, known for his collections of ichthyosaurs and plesiosaurs, some of which are still on display at the Natural History Museum in London. Hawkins was the author of several works, the most famous of which is his Book of the Great Sea Dragons, Ichthyosauri and Plesiosauri, published in 1840 by William Pickering and referred to in the present letter, which is written in the third person: "Mr. Hawkins with compts. to Mr. Pickering, will be glad to know why any delay should have occurred in verifying the plates sent by Mr. Standidge. "He will also be glad to hear what state his Poem is in. And also when the letter (which was enclosed to Mr. P. for the Russian Ambassador) was sent him, with a bound copy of the Sea-Dragons." "Mr. Standidge" is a reference to Standidge & Co., the London firm of lithographers. The "Poem" referred to in Hawkins's letter was most likely his The Lost Angel, and The History of the Old Adamites, Found Written on the Pillars of Seth (1840), also published by Pickering. . (Inventory #: 40463)
$950.00 add to cart or Buy Direct from
Jeremy Norman & Co.
Share this item
Jeremy Norman & Co., Inc.
Offered by