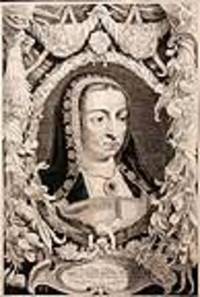 by SUYDERHOEF, Jonas (1613-1686) after Pieter SOUTMAN
Haarlem: Published by Pieter Soutman, 1644. Mixed method, engraving and etching. Printed on fine laid paper, with a watermark of a sun. In excellent condition, with the exception of being trimmed within the platemark on all sides. Image size: 15 3/4 x 10 1/2 inches. A stunning portrait of Queen Joan I, by Jonas Suyderhoef, one of the most celebrated Dutch portrait engravers. Jonas Suyderhoef, was one of the most eminent seventeenth century Dutch engravers. His refined and delicate technique, which combined a complicated use of etching and engraving, revolutionized the medium and introduced a new fluidity to the art of engraving. Considering his fame, surprisingly little is known of Suyderhoef's life and career. Born in 1613, he spent the entirety of his career in Haarlem, becoming one of the city's most esteemed craftsmen. It is conjectured that he received his training from the celebrated Dutch painter and engraver Pieter Soutman. He collaborated with his master on a number of plates and later reproduced many of his paintings into fine engravings. During his career Suyderhoef produced 138 magnificent engravings, the earliest of which is dated 1641 and the latest 1669. Although he did scrape a number of dramatic mythological scenes, the vast majority of his oeuvre was portraits. He reproduced the works of the Dutch masters, in particular the portraits of Rubens, Hals, Van Dyke, and his master Soutman. He entered the Haarlem guild in 1677, and was Franz Hals's principal engraver. In the history of the medium, Jonas Suyderhoef is considered one of the masters of portrait engraving. By illustrating the subtle beauty of the medium, his rich refined style set a precedent for future engravers. This magnificent portrait of Queen Joan I is an excellent example of Suyderhoef's skill, and an important work from one of the greatest old master engravers of the seventeenth century. Queen Juana I of Castile (1479-1555) is generally known as "Joanna the Mad." The third child of Ferdinand and Isabella, Joanna became Queen of Spain with the death of her mother in 1504. In a political match she married Philip I, known as Philip the Handsome, the son of Emperor Maximilian. They had two sons, Charles and Ferdinand, both of whom became Holy Roman Emperors. The first signs of her mental imbalance appeared in 1502 in the form of excessive jealousy over Philip, who had betrayed her by having an affair with a Moorish dancer, among others. The shock of his sudden death in 1506 intensified her melancholia, and she was forced to relinquish her crown. Her father, Ferdinand, resumed the regency until Charles ascended to the throne. It is recorded that Joanna was so distraught over her husband's death that she refused to be parted from his dead body and remained with him for days until she was forced to leave. Deemed unfit to reign she lived out her days under guard at Tordesillas. Hollestein, Dutch and Flemish etchings, engravings, and woodcuts, ca. 1450-1700 Vol XXVIII, p. 218, no. 35, state ii; Hind, A History of Engravings and Etchings p. 129; Benezit, Dictionnaire des Peintres, Sculpteurs, Dessinateurs et Graveurs. (Inventory #: 15314)
$300.00 add to cart or Buy Direct from
Donald A. Heald Rare Books
Share this item
Donald A. Heald Rare Books
Offered by