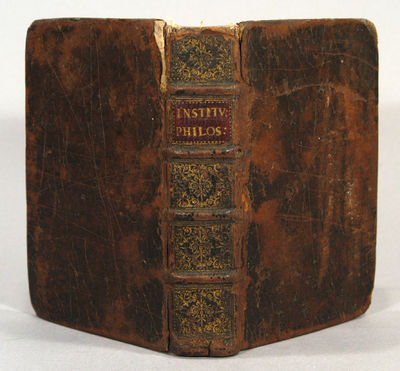 by LE GRAND, Antoine
1672. Faithorne. LE GRAND, Antoine. INSTITUTIO PHILOSOPHIA SECUNDUM PRINCIPIA D. RENATI DESCARTES Nova Methodo Adornata et Explicata. In Usum Juventutis Academicae. London, J. Martyn, Press of the Royal Society, 1672. Octavo. [xxiv]470[1]pp. Engraved frontispiece after Faithorne, and engraving at p. 221 showing the Solar System. First edition, appearing in London in Latin and English in the same year, and followed by several more printings in London, Nuremburg, and Geneva. Le Grand (1629-1699) a Franciscan monk, introduced and popularized the works and philosophy of Descartes in England, Germany, and France. His connections in Oxford, Cambridge, and the Royal Society enabled him to exert inluence and to defend Descartes in debates. This exposition of Cartesian principles was intended for students in universities. Lacking ffe. Frontispiece shows small chip to margin, not effecting printed area, and date corrected to 1674; 2 inch tear to p. 425. One Israel Cheever practiced his signature on the rear endpaper in 1759, and signed the printed title. Contemporary calf with intricately gilt spine and label. Superficial cracks to ends of hinges; wear to spine head. Withal a very good copy of the first edition of an influential book. (Inventory #: 84816)
$1,250.00 add to cart Available from
Boston Book Company
Share this item