JUNIUS, INCLUDING LETTERS BY THE SAME WRITER UNDER OTHER SIGNATURES 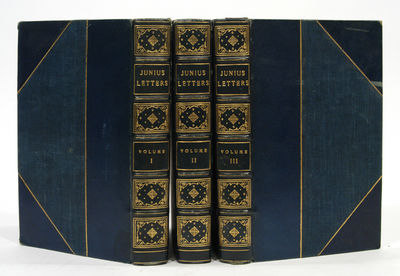 by JUNIUS
1812. JUNIUS, INCLUDING LETTERS BY THE SAME WRITER UNDER OTHER SIGNATURES (Now first collected). To which are added, his confidential Correspondence with Mr. Wilkes, and his private Letters addressed to Mr. Woodfall. With a preliminary Essay, Notes, Fac-similes, &c. London, Printed by G. Woodfall for F.C. and J. Rivington (et al.) 1812. Three octavo volumes. xii,248pp.(+2ff.); xii,516pp.(+2ff.); xiv,511(1)pp.(+2ff.). With six copper engravings distributed among the volumes. Five are folding facsimiles of "Junius'" handwriting, and the sixth shows the seals used on his letters. Published in the London Public Advertiser from January 1769 to January 1772, the letters attacked the Tory administration and Colonial policy, showing sympathy to the American cause and warning of the likelihood of revolution. His identity has never been established, but he is currently thought to have been Sir Philip Francis. A nice set, attractively bound in later half morocco, gilt. T.e.g. Light wear to extremities, else fine. (Inventory #: 76307)
$195.00 add to cart Available from
Boston Book Company
Share this item