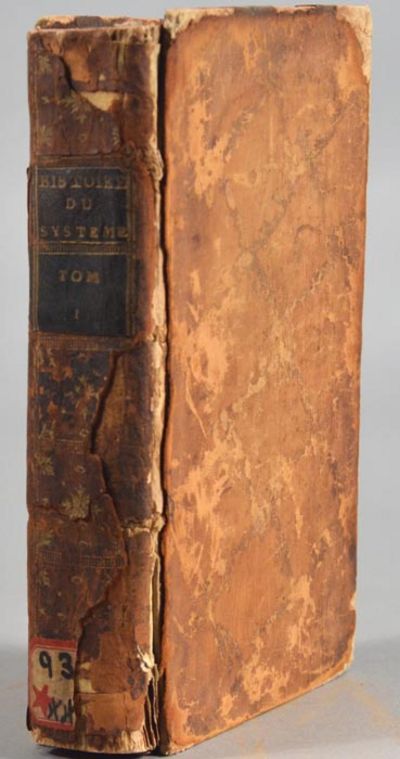 by HAUTCHAMP, Barthelemy Marmont du
1739. [HAUTCHAMP, Barthelemy Marmont du]. HISTOIRE DU SYSTEME DES FINANCES SOUS LA MINORITE DE LOUIS XV pendant les annees 1719 & 1720, Precedee d'un Abrege de la Vie du Duc Regent, & du Sr. Law. The Hague, Pierre de Hondt, 1739. Six 12mo volumes in three. 204[2]312; [2]208,[4]286pp.+[1]ff; [xiv]294[xvii]246pp. Titles in red and black. Tipped in to Volume 4 is a fine satirical engraving of a street vendor with a huge assemblage of varied merchandise ("Admire la Forces"), which was publicly circulated in derision of monopolies. In volume 6, there is one long sheet (14.75 inches) with four numbered tables printed back to back. The Regent (the Duke of Orleans), concerned about the economic state of France, allowed a Scottish financier named John Law to open the Banque Generale (later the Banque Royale) and issue paper currency, new to France. Law created the Compagnie d'Occident, which controlled all trade and financial dealings in the extensive French Holdings along the Mississippi, and later extended to Africa, China, and the East Indies. He purchased the Banque Royale, and became Comptroller of all France's finances. The collapse of the company, due to inflation and excessive stock issues, was disastrous for the French, rich and poor. This detailed contemporary account includes two volumes of relevant documents: letters of patent, arrests, royal decrees, etc. Some slits to folding chart in Vol. 6, and a few marginalia, otherwise internally fine. Leather binding of the period, worn and dried, with externally cracked hinges and some spine losses. Library markings. Complete but needs rebinding.(Kress 4447). (Inventory #: 83015)
$3,050.00 add to cart Available from
Boston Book Company
Share this item