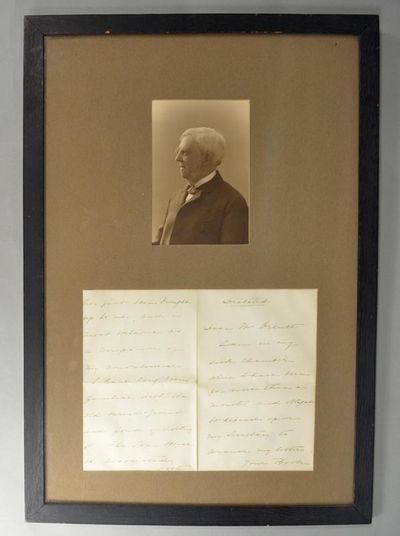 by HOLMES, Oliver Wendell
1894. HOLMES, Oliver Wendell. SIGNED LETTER. Addressed to William Dana Orcutt. Two oblong sheets, white wove paper, creased twice where the sheets have been folded. 7 by 8 3/4 inches. Writing to three sides. Return address and date: 296 Beacon Street. March 8, 1894. Mounted in a window mat and framed, with a contemporary photograph of Oliver Wendell Holmes. This poignant letter, composed by Holmes in his "sick chamber" in the final months of his life and dictated to his secretary, is a note of thanks to the young William Dana Orcutt for sending a copy of his first book "Good Old Dorchester: A Narrative History of the Town," which Orcutt had written written with the encouragement of Holmes. "Your book," Holmes writes, "has just been brought up to me, and is most welcome as companion of my convalescence." What follows is a wistful reverie of people and time past. "I have long been familiar with the old burial-ground and fond of visiting it. The Swan House is associated with some of my early recollections when as a boy I accompanied my father on one of his 'exchanges' with Dr Harris... I could not help wishing that the images which stood in front of the old Swan House had been still there as I remember them." One can imagine the "exchanges" between Holmes's father, Rev. Abiel Holmes, who was the minister of the First Church in Cambridge before its departure from Orthodoxy into Unitarianism, and Dr. Thaddeus Mason Harris, the pastor of the Unitarian First Church in Dorchester. Holmes also rememebers "the father of our venerable Dr John Pierce of Brookline," Howard Sargent, his classmate from Harvard, and "Old Dr Harris" who was "sound as a nut in orthodoxy." Holmes concludes graciously: "Regretting that I must employ the hand of another to express my sincere thanks, I am truly and gratefully yours." However, the Autocrat signs the letter himself "Oliver Wendell Holmes." The signature is clear and easily recognizable, although it lacks the firmness of his youthful hand. (DAB., Orcutt. From My Library Walls.). (Inventory #: 51499)
$750.00 add to cart Available from
Boston Book Company
Share this item