PROCEEDINGS AT THE RECEPTION AND DINNER IN HONOR OF GEORGE PEABODY 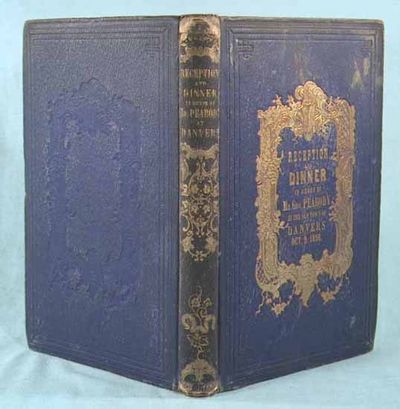 by PEABODY, George
1856. [PEABODY, George]. [HOMER, Winslow]. PROCEEDINGS AT THE RECEPTION AND DINNER IN HONOR OF GEORGE PEABODY, ESQ., OF LONDON, BY THE CITIZENS OF THE OLD TOWN OF DANVERS, OCTOBER 9, 1856. To which is appended an Historical Sketch of the Peabody Institute, with the exercises at the laying of the corner-stone and at the dedication. Boston: Published by order of the Committee of Arrangements; Henry W. Dutton & Son, Printers, 1856. Illustrated with 1 engraving and 17 tinted lithographs. At least two of the lithographs ("View of Arch at Davensport-and Residence of Hon. John D. Black" and "Arch Near Baptist Church, Davensport"), and possibly a few others, are by Winslow Homer, who was apprenticed at that time to the lithographic firm of John H. Bufford. They are among the earliest examples of his graphic work. (Tatham, p. 27-33.) Octavo: vi,[2],195 pp. Contemporary blue cloth, gilt-stamped title and decoration to spine and upper board, a.e.g. Presentation inscription from R. S. Daniels and Francis Baker, chairman and secretary of the planning committee respectively, and an ink ownership on ffep. Ex-library, with only a bookplate on front pastedown. Binding is rather worn looking but solid, being moderately soiled and rubbed all over, and showing some loss at heel and crown. This plates in this copy are cleaner than usually seen; tissue guards show light foxing, but with only occasional, very light foxing on some of the plates and facing text pages. Shallow dampstaining in top margin of final leaves. Tipped-in on the verso of the final leaf is a contemporary newspaper clipping recording Peabody's gift of 150,000l. to the city of London for relief of the poor and needy. A very good copy overall. George Peabody, famed financier and philanthropist, was born in South Danvers (now Peabody), MA, in 1775. He received only a rudimentary education, due to the poverty of his family, and began working at the age of eleven. In 1814, he went into what proved to be a successful mercantile business with Elisha Riggs's wholesale dry-goods warehouse. At the time of Riggs' retirement in 1829, branches were in existence throughout the eastern United States. In 1837, Peabody moved to London and established himself there as a merchant and exchange broker. In 1854, he took Junius Spencer Morgan into partnership; this venture later became J.P. Morgan and Company. (Inventory #: 74796)
$150.00 add to cart Available from
Boston Book Company
Share this item