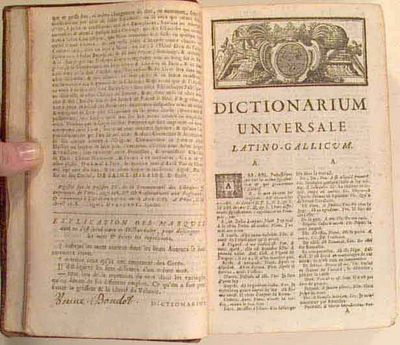 by BOUDOT, Jean
1721. BOUDOT, Jean. DICTIONARIUM UNIVERSALE LATINO-GALLICUM, ex Omnibus Latinitatis Auctoribus summas diligentia Collectum... ad Usum Serenissimi Dombarum Principis. Paris, apud Viduam Joannis Boudot, 1721. Octavo. [xxvi]1049pp. Fifth edition. First published in 1704 by Jean Boudot, who died two years later, the dictionary was so successful it had gone into 18 editions and was still in print 100 years later. The Widow Boudot states that "la bonne Edition," which is augmented by over 2,000 new words, can be recognised by her signature, which is present at the end of the "Privilege du Roi." Any copies lacking this signature can be considered of an earlier edition, less complete than this one, or of counterfeits. Title-page in black and red; woodcut crest with dedication to Louis Bourbon. A very nice copy, internally near fine, in contemporary panelled calf worn at extremities, with superficial cracks to hinges, and only partial lettering-piece. A well-used book, but a solid binding. This edition not in British Library or OCLC. (Inventory #: 77219)
$975.00 add to cart Available from
Boston Book Company
Share this item