PRINCESS AND THE GOBLIN 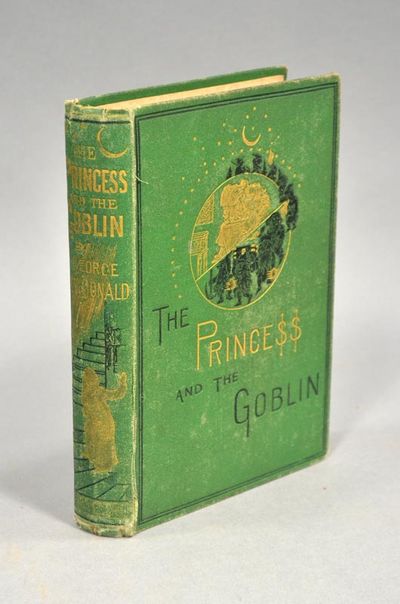 by MACDONALD, George
1871. MACDONALD, George. THE PRINCESS AND THE GOBLIN. New York: George Routledge and Sons, 1871. First American edition of MacDonald's second full-length fairy tale, following At the Back of the North Wind, which had appeared in the preceding year. 30 wood-engraved illustrations by Arthur Hughes. Octavo. iv,315 pp. Publisher's green cloth binding with pictorial decorations on spine and front cover, based on text illustrations by Hughes, in gilt and black. Off-white coated endpapers. All edges gilt. Binder's ticket ('Bound by Burns & Co.') on rear pastedown. The decoration of the American binding is almost identical with the Strahan & Co. first-edition binding, including the crescent moon and flaming torch in gilt outside of the front cover circle, and with the publisher's name gilt-stamped at the base of the spine - only in this case it is Routledge. The difference occurs on the spine where the entire title is gilt-stamped, as opposed to the Strahan copies on which the the word 'goblin' is printed in black. The binding is rubbed along edges, lightly abraded on surfaces, and is slightly askew. The bookblock is sound but has been glued into the case slightly lower than it should be, by about 5 mm. Pencil gift inscription at head of title-page with the date (1876) written in ink below it. Text leaves are clean but for some light foxing to a few pages near the beginning. A rare edition, the existence of which was uncertain, and the 1872 edition being cited as the first. In about very good condition. (Shaberman 48). (Inventory #: 81241)
$2,500.00 add to cart Available from
Boston Book Company
Share this item