TREATISE ON THE CULTURE AND MANAGEMENT OF FRUIT TREES 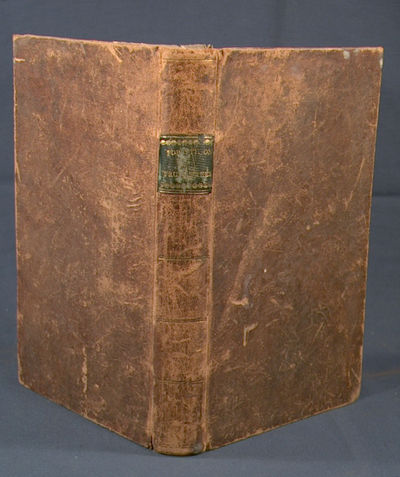 by FORSYTH, William
1803. FORSYTH, William, and William Cobbett. A TREATISE ON THE CULTURE AND MANAGEMENT OF FRUIT TREES; IN WHICH A NEW METHOD OF PRUNING AND TRAINING IS FULLY DESCRIBED, TOGETHER WITH OBSERVATIONS ON THE DISEASES, DEFECTS AND INJURIES, IN ALL KINDS OF FRUIT AND FOREST TREES... Albany: D. & S. Whiting, 1803. 280 pp. + thirteen plates (engravings). 8vo., full leather with gilt black leather spine label. Good, front board bowed, leather a bit scuffed. As might befit a book carried in an orchard, there is a bit of worming to the inside covers and rear endpapers. Light to moderate foxing throughout. The folding plates are printed on heavy paper, and are moderately to heavily foxed. The pruning engravings are detailed and well annotated; the last folding plate (xiii) illustrate an assortment of arborists's tools. Title page continued: "...as also, an Account of a Particular Method of Cure, Made Public by Order of the British Government...to which are added, an introduction and Notes, Adapting the Rules of the Treatise to the Climates and Seasons of the United States of America (by William Cobbett). (Inventory #: 79599)
$175.00 add to cart Available from
Boston Book Company
Share this item