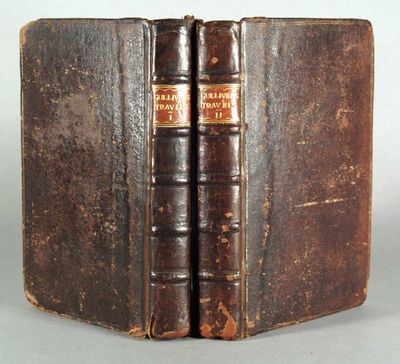 by SWIFT, Jonathan
1726. [SWIFT, Jonathan]. TRAVELS INTO SEVERAL REMOTE NATIONS OF THE WORLD. In FOUR PARTS. By LEMUEL GULLIVER, First a SURGEON, and then a CAPTAIN of several SHIPS. Vol. I.[II.] London: Printed for Benj. Motte, at the Middle Temple-Gate in Fleet-street, 1726[-1727]. Mixed first and second edition. Four parts bound in two octavo volumes: xii,148,[vi],164; [vi],155,[1 blank],199,[1 blank]. Engraved frontisportrait of Gulliver in Vol. I in the usual second state, with the inscription "Captain Lemuel Gulliver of..." on the oval and a Latin inscription on the tablet. Also illustrated with four maps, two plans, and numerous wood-engraved head- and tail-pieces. Contemporary calf boards, expertly rebacked with later matching calf spines and leather labels, all edges stained red. Early ink ownership on front fly-leaf of Vol. I. Boards have gently rounded fore-corners and abraded surfaces. The lower joint of Vol II is starting. Rear endpapers in both volumes are replacements and are slightly toned. Occasional light foxing and/or soling to text, but very good overall. Vol. I is first edition, second printing (Teerink no. 290: first edition state AA) throughout, with all titles, typos, pagination, and signatures as called for. Vol. II is second edition (Teerink no. 293) throughout, with all titles, typos, omissions, pagination, and signatures as called for, including "The Second Edition, Corrected" on the title-page and the facing page of advertisements. Gulliver's Travels was an immediate success upon publication (28 October 1726), requiring many rapid, subsequent printings to meet demand, all of which has led to its bibliographical complexity. For example, the time elapsed between the printing of the two volumes in this set was only six months. And based upon the style, condition, and wear to the bindings of these volumes, they were probably mated at or immediately after publication in 1727. (Inventory #: 84107)
$5,750.00 add to cart Available from
Boston Book Company
Share this item