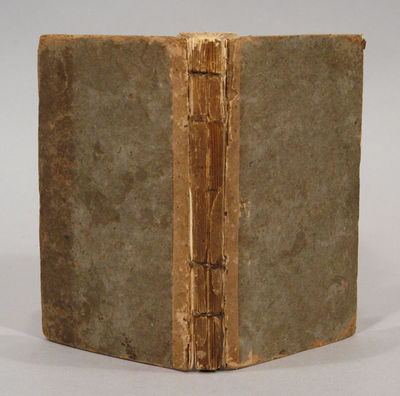 by CONDILLAC, Etienne Bonnot, Abbe de
1809. CONDILLAC, Etienne Bonnot, Abbe de. THE LOGIC OF CONDILLAC, Translated by Joseph Neef, as an Illustration of the Plan of Education Established at his School near Philadelphia. Philadelphia, 1809. 12mo. 136[2]pp. First American edition. Condillac (1715-80) proposed that all learning and thinking originated in sensory experience. Joseph Neef (1770-1854) brought the ideas of Pestalozzi, the Swiss educational reformer, to the USA. Following Pestalozzi, he pioneered in the principles of "alternative education:" establishing a friendly relationship with the students, and eschewing memorization, drill, and corporal punishment in favor of field trips, demonstrations, and participatory learning. He believed that understanding was preferable to rote, and that health and excercise promoted learning. After founding schools in Switzerland and Paris he was persuaded to come to Philadelphia, and then to the Indiana utopian community of New Harmony. This book follows up on Neef's "Sketch of a Plan and Method of Education" (Philadelphia, 1808), the first educational treatise published in the New World. In early gray-green boards. Paper spine quite worn; foxing and spotting, light dampstain to last few leaves; ink owner's names to title. On the whole just a good copy. Quite scarce. (Inventory #: 78834)
$750.00 add to cart Available from
Boston Book Company
Share this item