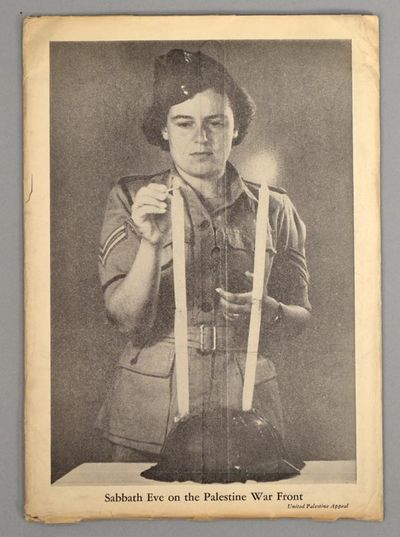 by UNITED PALESTINE APPEAL
1944. [ISRAEL]. UNITED PALESTINE APPEAL. [FUNDRAISING APPEAL FOR REFUGEES, OVERSEAS NEEDS, AND PALESTINE ISSUED BY THE UNITED PALESTINE APPEAL, CIRCA 1944.] A fundraising packet comprised of five pieces stored in a pictorial envelope, 10 1/2 x 7 1/2 in. 1.) "The Redeemed become the Redeemers," a broadside plea for contributions; printed on the reverse is a New York Times article from January 15, 1944. NY: United Palestine Appeal, n.d. 2.) The Facts about Palestine. By Arthur Lourie. NY: American Zionist Emergency Council, n.d. 20 pp. Pamphlet format: paper wrappers, stapled. 3.) The Future of the Jews. By Dorothy Thompson. NY: United Palestine Appeal, n.d. 14 pp. Pamphlet format: paper wrappers, stapled. 4.) An American Soldier in Palestine. NY: United Palestine Appeal, n.d. Illus. [20] pp. Pamphlet format: paper wrappers, stapled. 5.) "Sabbath Eve on the Palestine War Front," a photograph showing a young woman, dressed in military uniform, lighting the Sabbath candles. The photograph is also printed on the envelope. The contents of the envelope are fine except for the photo, which has just a slight trace of adhesive from the (missing) envelope flap and some faint creasing at the top-edge. The envelope is generally dust-soiled, occasionally nicked, and just starting at one fold. (Inventory #: 75371)
$200.00 add to cart Available from
Boston Book Company
Share this item