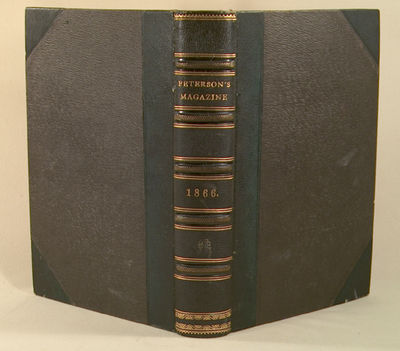 by PERIODICAL
1866. (PERIODICAL). PETERSON'S MAGAZINE. Volumes 49 and 50, January - December, 1866. Philadelphia: [C. J. Peterson,] 1866. Steel and wood engravings illustrate the tales and sketches; also included are twelve hand-colored fashion plates (folded), patterns for needlework and knitting projects, and a song for each month. Twelve issues bound as one. Tall 8vo.: iv,438;iv,440 pp. Nineteenth century binding; half morocco with brown cloth sides, gilt title at spine, and marbled endpapers. Bookplates at front pastedown. Occasional light foxing, but a lovely copy overall. This volume contains a full year of Peterson's Magazine, a successful rival of Godey's Lady's Book; not only was it a lady's magazine, but thoroughly and consciously American. It was produced by American authors for American women. This volume contains a complete novel, which was published in twelve monthly installments, "The Soldier's Orphans," by Mrs. Ann S. Stephens. Stephens was immensely popular in the mid nineteenth century and wrote exclusively for Peterson's Magazine; one of her stories, Malaeska, was reprinted in 1860 as the first Beadle Dime Novel. It also contains two short stories by Louise Chandler Moulton, "The Second Wife's Story" and "Nora." (Sterm, We the Women). (Inventory #: 64893)
$350.00 add to cart Available from
Boston Book Company
Share this item