FLORA: A BOOK OF DRAWINGS 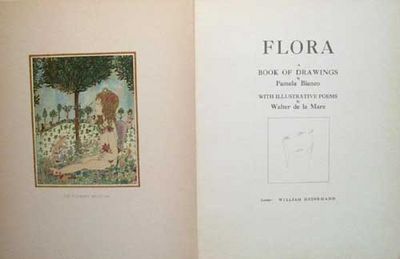 by BIANCO, Pamela
1919. BIANCO, Pamela. BIANCO, Pamela. FLORA: A BOOK OF DRAWINGS. With Illustrative Poems by Walter de la Mare. London: William Heinemann, (1919). First edition of Bianco's first book; it is inscribed by her on the ffep.: "For Harriet Sprague, with love from Pamela Bianco." Illustrated with 8 color plates and many line illustrations. [8],43 pp. Quarto, illustrated paper boards. A little minor wear to boards, else a fine copy in a very good illustrated dust-wrapper, which has some occasional light soiling, is starting at spine folds, and has shallow loss at heel and crown. Pamela Bianco, born in 1906, was a drawing prodigy; and this book is a result of her first exhibition at the Leicester Galleries, in 1919, when she was thirteen. Walter de la Mare, a visitor to the show, was moved by her exquisite drawings to write the poems that accompany them in this volume. Bianco went on to illustrated books written by others, including her mother, Margery Williams Bianco, as well as books that she wrote. (National Book League, Walter de la Mare: A Checklist, A36 mentions that there are at least five variants to this edition, due to binding errors, causing misplacement of poems and drawings; but it does not list them. In this copy, the last poem, "Sephina," finishes on p.43 with a small illustration at the bottom.). (Inventory #: 78786)
$750.00 add to cart Available from
Boston Book Company
Share this item