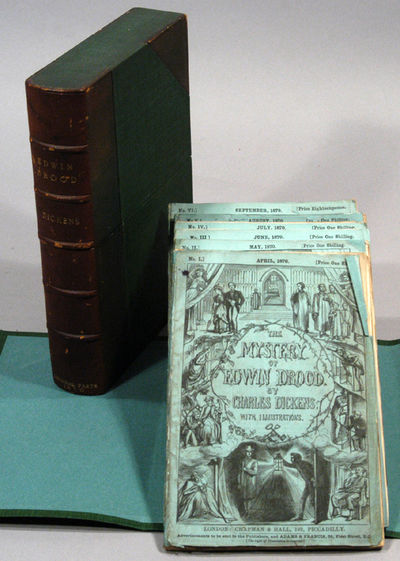 by DICKENS, Charles
1870. FILDES, S. L.. DICKENS, Charles. THE MYSTERY OF EDWIN DROOD. With Twelve Illustrations by S. L. Fildes, and a Portrait. London: Chapman & Hall, [April - September] 1870. First edition. A total of 14 illustrations, including a portrait of Dickens and a vignette title-page. Octavo. [viii,1]-190,[2] pp. In the original six monthly parts, as issued, in blue paper wrappers. Housed in a green three-quarter leather pull-off case in a green cloth chemise. Wrappers show some general light wear but,some minor expert repair and are very good overall. The front wrap on Part 1 has a small ink spot near one edge and shows a bit more wear than the other wrappers. Almost all advertisements are present, including the rare cork ad in Part 2, lacking only four pages (nos. 7 - 10) of the "Edwin Drood Advertiser" in Part 3 and the eight-page Chapman & Hall catalog in Part 5. Another minor difference, the eight-page Chapman & Hall catalog in Part 1 is not completely unpaginated; pages 2 and 3 are marked as such. Part 6 has the "Eighteenpence" slip pasted over the original price on front wrap as found in the earliest issues. Some plates show mild light foxing. Text leaves are clean. This was Dickens' last work; it was left unfinished at his death in June, 1870. (Hatton & Cleaver, pp. 371-384). (Inventory #: 83093)
$1,750.00 add to cart Available from
Boston Book Company
Share this item