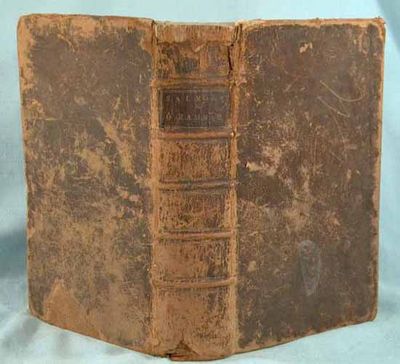 by SALMON, Thomas
1771. SALMON, Thomas A NEW GEOGRAPHICAL AND HISTORICAL GRAMMAR: Wherein the geographical part is truly modern; and the present state of the several kingdoms of the world is so interspersed, as to render the study of geography both entertaining and instructive... Illustrated with a new set of maps of the countries described. The Fourteenth Edition, with very large additions and improvements, brought down to the present times. Edinburgh: Willison and Darling..., 1771. Twenty-four plates, including twenty-two fold-out maps, as called for, and a frontispiece portrait of King George III and Queen Charlotte. Octavo: xii,[2],7-603,[13] pp. In a much worn and heavily scuffed contemporary leather binding with 1/2" loss at crown, a short tear at heel, one joint starting, and a skinned patch on the lower board. Near contemporary ink ownerships on back of frontispiece. The text leaves and maps are age-toned with some intermittent light to moderate foxing. Most maps are crisply folded and have sharp edges. The notable exception is the map of the world which has some loss along one fold (a rectangular patch in the Pacific Ocean), a horizontal tear at the top edge (without loss but the piece is heavily creased), and it is starting at folds. Nonetheless, despite the wear noted above, it is a very good and complete copy of this popular eighteenth-century work which is seldom found intact. (Inventory #: 77691)
$850.00 add to cart Available from
Boston Book Company
Share this item