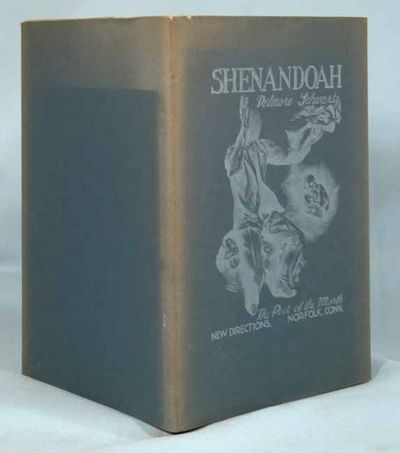 by SCHWARTZ, Delmore
1941. SCHWARTZ, Delmore. SHENANDOAH. Norfolk, CT: New Directions, (1941). "Poet of the Month" series. First edition. This verse drama deals with a family's quarrel over the naming of a son, Shenandoah Fish, which is obviously analogous Schwartz's name, about which he was quite sensitive. Inscribed to the poet Theodore Morrison. "Ted, from Delmore, October 1941." Illustrated by Frederico Castellon. Printed by George Hornby at The Domesday Press, New York City. 28 pp. 8vo., plain paper wrappers, wire saddle stitch. In a dark blue dust jacket, illustrated on the upper wrapper in grey-blue. Internally clean and fine; however, the dust jacket is sunned at perimeters and on the lower panel, with some light edgewear. Inscribed copies by Schwartz are uncommon, and this is a very good copy, inscribed by him. (Inventory #: 62837)
$975.00 add to cart Available from
Boston Book Company
Share this item