The Unlovelinesse, of Love-Lockes. Or, A Summarie Discourse, prooving: The wearing, and Nourishing of a Locke, or Love-Locke, to be altogether unseemely, and unlawfull unto Christians : In which there are likewise some passages collected ... against Face-painting; the wearing of Supposititious, Poudred, Frizled, or extraordinary long Haire; the inordinate affectation of corporall Beautie: and Womens Mannish, Unnaturall, Impudent, and vnchristian cutting of their Haire; the Epidemicall Vanities, and Vices of our Age 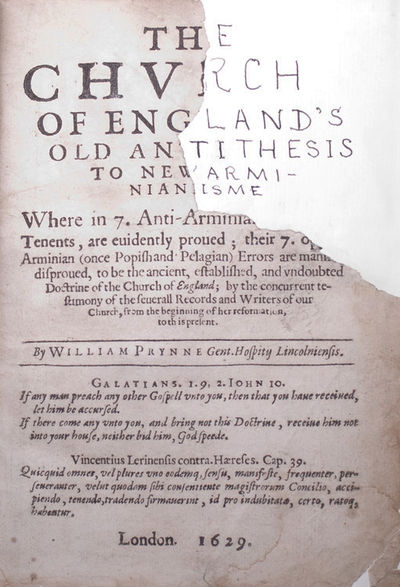 by Prynne, William
London: [no name], 1628. First edition. [24], 63, [1] p. 1 vols. 4to. Bound with three other titles by Prynne, in modern brick-red buckram. Ex-library, with bookplate on front pastedown, foot of spine with call number lettered in white. First edition. [24], 63, [1] p. 1 vols. 4to. The Puritan View of Long Hair. The Puritan controversialist William Prynne, famous for his attack on the English theater in Histrio-Mastix (1633) , here turns his wrath on the 17th-century fashion of growing one lock of hair longer than the others, calling it "unnaturall" and 'shamefull," characteristic of savages. According to Prynne, Satan used these lovelocks to pull folks down to hell; and those who wore them were "Ruffians, Rovers, Fantastiques, Humourists, Fashion-mongers ... Effeminate, Lascivious, Voluptuous, Singular, or Vaine-glorious persons." Prynne himself, who was later condemned to prison for libel and had his ears cropped off, had to wear his hair long in order to cover up the ear stubs