2 Autograph Letters (one by Harry, one by Frank) signed, with one signed sketch by Frank with autograph sentiment 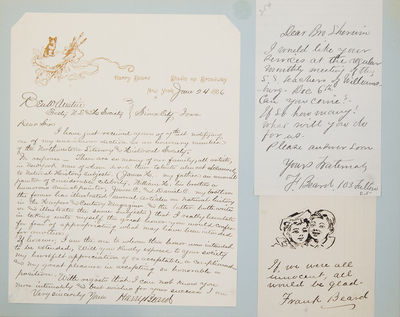 signed Each one page. 1 vols. 4to (letter from Harry, on his Studio stationery); 8vo, 12mo

" ... There are so many of our family, all artists, in New York, some of whom devote their talents almost exclusively to Natural History Subjects. (James H. - my father an animal painter, James C. and Daniel C. my brothers, the former has illustrated several articles on natural history in the Harpers and Century Magazines, and the latter both writes and illustrates the same subjects) that I really hesitate in taking to myself the great honor you would confer for fear of appropriating what may have been intended for another ... "

A brief letter to "Dear Bro Shermain (?)", inviting him to a meeting of the "S.S. Teachers of Williamsburg;" finally, there is a charming signed sketch by Frank Beard of a boy and a girl, smiling cheek to cheek, with the autograph sentiment penned below by Beard: "If we were all innocent, all would be glad - Frank Beard. (Inventory #: 43657)
$300.00 add to cart or Buy Direct from
James Cummins Bookseller
Share this item
James Cummins Bookseller Inc.
Offered by

New York : Charles Reznikoff , 1927
(click for more details about Nine Plays)
View all from this seller>