SONGS, CHIEFLY IN THE SCOTTISH DIALECT 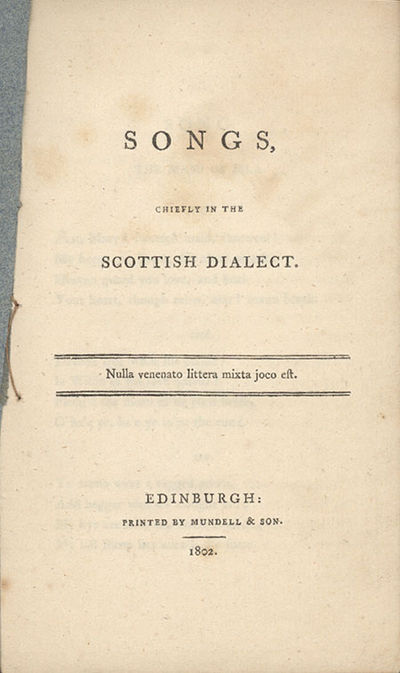 by [Boswell, Sir Alexander]
Edinburgh: Printed by Mundell & Son, 1802. 24pp. Small octavo. Sewn into somewhat later plain wrappers. A few minor corner nicks, wrappers split at spine, trivial foxing, otherwise a near fine copy. First edition, first printing, of the first separate publication by the son of the biographer. In addition to Alexander's original verse and adaptations, which the DNB describes as "very graphic, full of Scotch humour, but coarse at times," the collection prints for the first time James Boswell's poem, "Song to an Irish Air." This edition is quite rare, and the collection is most commonly known through the 1803 second edition, published under the imprint of Manners & Miller, paginated at 34pp. Pottle treats James Boswell's appearance based on the 1803 edition, noting that edition "seems to be very scarce. I have met with only one copy, that in the New York Public Library." An OCLC search (as of 2013) records eight copies of the 1803 second edition, and four copies of this edition (Yale, Harvard, McMaster and Nat'l Library of Scotland). We note one copy at auction in recent years: Sotheby's, Sept 28, 1979, lot 374, £1,400 ($3066.00), to Quaritch. POTTLE (POSTHUMOUS PUBLICATIONS) 3 (1803 edition). NCBEL III:368. TINKER 296 (1803 edition bound with other, later publications). (Inventory #: WRCLIT41445)
$6,000.00 add to cart or Buy Direct from
William Reese Co. - Literature
Share this item

London : Chatto & Windus , 1952.
(click for more details about SANCTUARY)
View all from this seller>